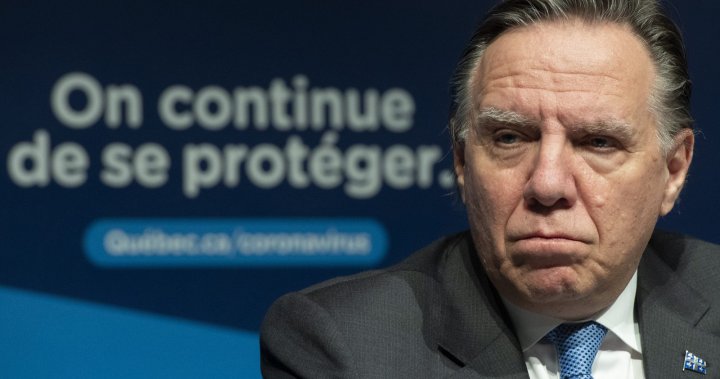 Quebec’s plan to impose a tax on adults who choose to remain unvaccinated against COVID-19 is already being called “constitutionally vulnerable” by critics — but experts say the province is well within its rights, and challenges are likely to fail.

Details about the proposed tax are slim, but Premier Francois Legault said Tuesday the penalty would be “significant.” Those with a medical exemption would be exempt from the tax.

Legal experts say provinces have a constitutional authority to levy direct taxes in order to pay for services like health care, and that it makes sense from a fairness perspective to force those who pose the most burden on the health care system to pay more for it.

“They’re not taking away people’s freedom, they’re just requiring people to pay a price if they pose a risk,” said David Duff, a professor in the University of British Columbia’s Peter A. Allard School of Law.

“If the health care system were financed through private insurance, which is priced on the basis of risk, one would expect to see higher premiums for the unvaccinated. This is a demonstrable risk.”

The tax is being proposed as Quebec faces an unprecedented strain on its health care system due to the highly transmissible Omicron variant, which is sending more people to hospital than at any other point during the pandemic.

More than 2,700 people were in hospital with COVID-19 as of Tuesday, including 255 patients in intensive care. Another 62 deaths were also reported Tuesday alone.

Legault noted that half of those in intensive care are unvaccinated — even though that group comprises 10 per cent of the adult population.

Duff says although the prospect of taxing people for choosing not to get the vaccine may be unprecedented, the tax system has long been used to incentivize people’s behaviours through credits or relief.

“We get a tax break on investing in our retirement, why? Because (the government) wants to encourage that,” he said. “You give to charity, you get something back. This is similar to that.

“Will it influence people’s behaviour? That remains to be seen.”

2:13
Quebec to introduce health tax for the unvaccinated

Quebec to introduce health tax for the unvaccinated

While the tax is unprecedented in Canada, similar measures have been introduced by other countries. Austria announced in December that vaccine holdouts over the age of 13 will have to pay up to 3,600 euros ($5,139 Canadian) in fines every three months. Starting this month, Greece will fine residents aged 60 and over who refuse the vaccine 100 euros (CA$142) monthly. And in Italy, residents 50 and older are now required to be vaccinated or could face fines of up to 1,600 euros (CA$2,287).

Quebec physicians order asks for harsher measures against the unvaccinated

It’s yet to be seen whether such policies will drive up vaccinations in those countries. But Devon Greyson, an assistant professor in the School of Population and Public Health at the University of British Columbia, says the impact may not be as big as Quebec officials are hoping for.

They point to studies done in B.C. that found while most people supported policies that improved vaccine access and information, that support dipped slightly for incentives like cash payments for getting the shot — and plummeted when respondents were asked about punishing holdouts.

“It’s reasonable to think this may result in a short-term uptick in vaccinations, but I think the questions are more about the long-term effects and simply the ethics of going ahead with something like this,” they said.

“I think it’s interesting that this comes after Quebec backed off the vaccine mandate for health-care workers, who would reasonably be a greater source of infection than the general population.”

Greyson says it will be important for the Quebec government to ensure vaccinations are accessible to all segments of the population — including low-income and racialized residents — before starting to penalize the unvaccinated.

That’s also a chief concern of the Canadian Civil Liberties Association, who issued a statement Tuesday evening that predicted the “divisive measure … will end up punishing and alienating those who may be most in need of public health supports and services.”

“We do not fine individuals who make poor diet and exercise choices, those who choose higher risk occupations or recreational activities,” said acting general counsel Cara Zwibel. “Some essential services — like basic health care for those who are ill — transcend such individual choices.”

In an interview, Zwibel said the tax may also violate protections of individuals’ bodily autonomy included in the Canadian and Quebec charters of rights and freedoms.

“You have to ask, is it justified?” she said. “The burden is on the government to prove they have a pressing and substantial objective that (they) are trying to achieve and that this is a proportional response to that. And the government hasn’t said what the objective is here.”

Legault did not explicitly say that his goal with the tax was to drive up vaccinations, but his government has repeatedly stressed the importance of inoculations to ease the pandemic and reduce the strain on the health care system.

Constitutional law experts also say the proposed tax would not limit people’s access to health care in the way charging unvaccinated patients for services would, clearing the threshold set by the Canada Health Act.

Stephane Beaulac, constitutional law professor at the University of Montreal, told Global News that any legal challenges against the tax would likely be based on arguments of discrimination, which would be difficult to succeed.

“The problem is that under the Canadian Charter or the Quebec Charter … there are specific grounds of discrimination that are prohibited,” he said. “And last time I checked, there is nothing specifically addressing one’s vaccination status.

“In other words, choosing not to get vaccinated is, under Canadian and Quebec law, something that is within the realm of freedom, of one’s liberty. But that doesn’t mean that if there is a measure that goes against the choice that one has made for oneself, that it would constitute discrimination.”

Alberta and British Columbia said Tuesday they would not follow Quebec’s lead and introduce a financial penalty for unvaccinated people.

Duff says those provinces and others will still be watching how the proposed tax plays out in Quebec — and whether it makes any difference in the fight against the pandemic.

“Whether others follow, we’ll see,” he said. “But I doubt it will move rapidly.”

— with files from Global Montreal and the Canadian Press