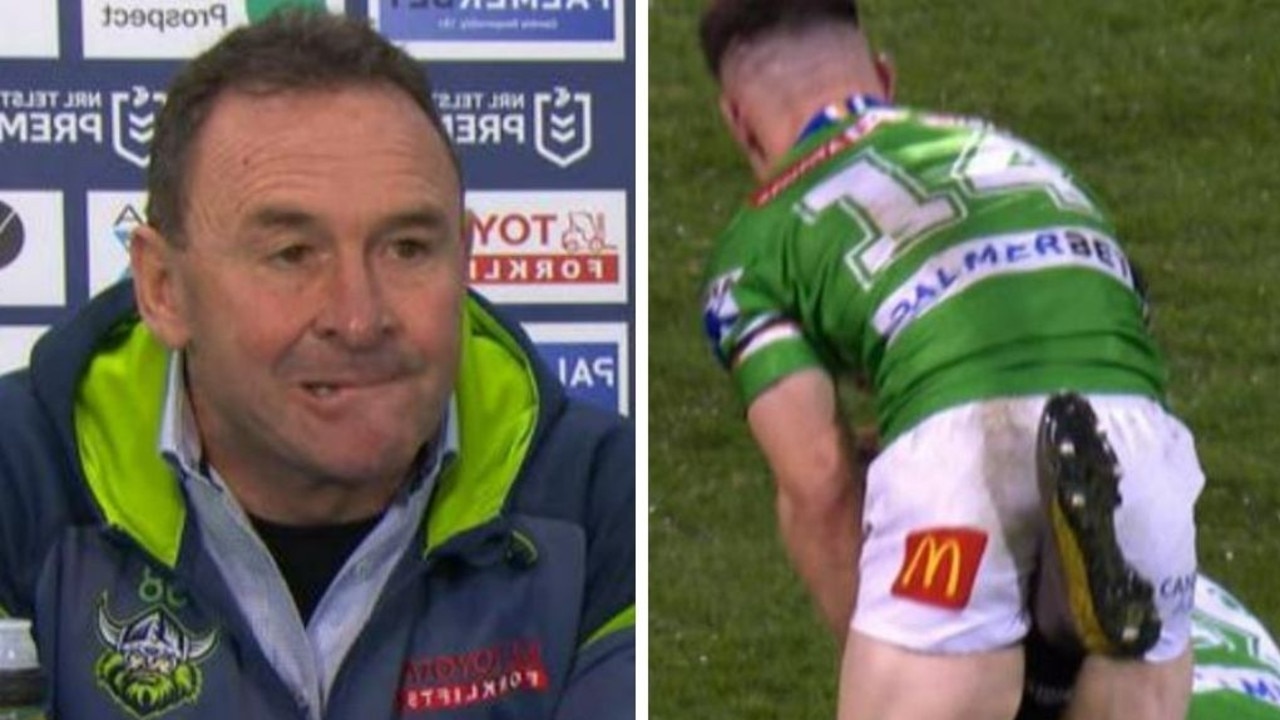 Ricky Stuart has been slammed for launching a stunning tirade at Panthers five-eighth Jaeman Salmon after he was placed on report for a kick aimed at Raiders hooker Tom Starling.

In the 60th minute of the Panthers’ 26-6 win on Saturday night, Salmon lashed out with his boot after he was tackled by Starling.

“He has got one in the lunch box and one on the chin,” Michael Ennis said.

Raiders coach Stuart was fuming at Salmon and delivered an extremely personal attack in his press conference.

“The James Fisher-Harris and Joe Tapine tackles are accidents and in this collision game I understand that,” Stuart said.

“But where Salmon kicked Tommy (Starling), it ain’t on.

“I have had history with that kid (Salmon). I know that kid very well.

Panthers coach Ivan Cleary was asked about the tackle and Stuart’s comments in his press conference.

“I don’t know, it is hard to see on our small screen,” Cleary said.

“I can’t imaging Jaeman would have deliberately done that, but I honestly didn’t see it.

“I don’t think I need to respond to those comments (from Stuart).

“I know what Jaeman is like and he is valuable in our club and we love him, so that is all that matters to us.”

But others thought Stuart had overstepped the mark.

“He is in a position of power and being a coach. He is clearly frustrated. His team is on life support at the moment in regards to their season.

“Is he bringing the game into disrepute by saying what he did? I’m not sure.

“If a player said that to another player is it OK? It would then strike up a feud between two players and we would really enjoy that.

“The fact that Ricky Stuart is the head coach of the Raiders and saying it about a player I don’t think it looks great.

“However, I am not 100 per cent sure if he is bringing the game into disrepute. I’m sure it will be a talking point for a week the comments coming from Ricky Stuart.”

Parker believes Stuart could face a sanction from the NRL over the public outburst.

“I can’t think in my time of an incident that has happened like that where a coach has gone after a player or said some things about a player,” Parker said.

“It will be really interesting to see what comes of it over the next couple of days.

“But the optics aren’t great, particularly being in the position that Ricky is being a head coach.”

Cooper Cronk believes Stuart should have left the judiciary to punish Salmon for the tackle and not resorted to a public attack on Salmon’s character.

“Jaeman Salmon was placed on report for an act that will be looked at by the judiciary and the game will look after that,” Cronk said.

“In my opinion in terms of Ricky Stuart I don’t think a coach should publicly call out someone and personally suggest a few things about an opposition player. That’s not for the opposition coach.

“The Salmon thing will be dealt with at the judiciary and in terms of the Ricky thing I just don’t think it is a good look.”

Later when they had more time to digest what had happened Cronk and Parker were far more scathing of Stuart’s actions.

“Yep, Salmon did something wrong on the field and that will be looked at and that’s done with let the judiciary deal with it,” Cronk said when asked if Ricky went too far.

“The other part of this too is that Ricky is one of the greatest players of our game and I’m not sure what the history is. I have got no idea. But Salmon has played 40-odd games of first grade.

“The balance of power is a bit out of whack there. I think he could have kept his emotions in check and played it another way.

“But I just don’t like the fact an opposition coach publicly and personally has a crack at another player.”

“Ricky Stuart has been coaching in the game for 20 years and absolutely disgraceful comments from Ricky Stuart,” Parker said.

“To publicly humiliate a player regardless of the situation on the field. That will be dealt with.

“The words that he has used in regards to Salmon are completely out of line.”