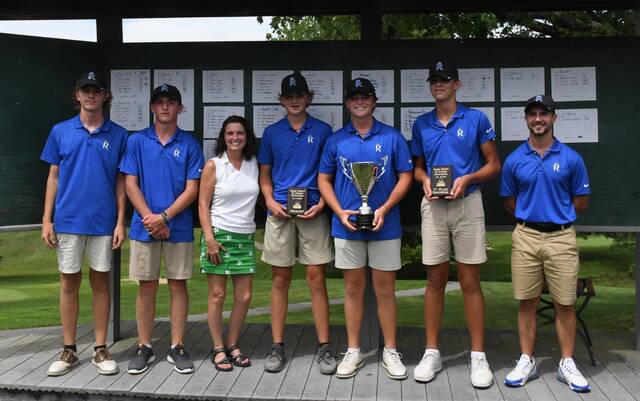 Trey Cracraft didn’t really pick up the game of golf until his freshman year.

But he fell in love with golf, dedicated himself and now he has his first career victory after winning the Mason County/St. Patrick Invitational at Maysville Country Club on Saturday.

Cracraft was the lone golfer out of 86 to finish under par in the field, firing a 71 to win by two strokes over teammate Jake Feldhaus and Cooper’s Yuji Maruishi.

“I’ve worked really hard for this. I started off playing, this will be my fourth year of golf and I started off shooting about 120 and then just grinded every year and finally got the first one,” Cracraft said. “Just hitting golf balls every day. I used to be a three-sport athlete and then I quit the both of those sports for golf. I just fell in love with it this last year, golfed everyday and just finally put something together.”

Feldhaus ended up finishing second after defeatingMaruishi on the first playoff hole after both carded rounds of 73’s.

It was an all-around good day for the Royals, the team shooting a 299 to win by 11 strokes over Great Crossing for back-to-back titles at MCC, also shooting a 299 as a team last year.

It’s the third win in four tournaments for the Royals in the first eight days of the season, Grant Owens also finishing in the top 10 with a 76, Quin Grooms firing a 79 and Noah Gardner rounding out the scoring with an 81.

“My journey with Trey started last year. When he decided to not play basketball last year, he wanted to hit the weight room and I gave him a workout plan for golf. You can really tell he’s hitting the ball a whole lot farther, hit the weight room hard and it’s paid off,” Royals coach Bryson Bennett said. “It shows in our four tournaments that we haven’t relied on the same four guys. That’s how you play championship golf. Teammates picking each other up and being able to compensate for each other’s score.”

Cracraft’s day got started out on the right foot. He felt that really kickstarted his round, climbing to three-under through his first nine holes.

“I started off with a birdie on one, before I came in here I was like, ‘I know what I’m doing here. It’s my home course.’ And to start off with a birdie on my first hole which was number two, and I was like let’s go low today,” Cracraft said. “Finally got the putter going, got to see some putts go in the hole. Have been hitting my irons and driver really well so it was good to see the putter get going.”

He’d make par his next six holes before running into some trouble on 17 and 18 with bogeys. With his round starting on No. 2 he’d par No. 1 to finish out his day with the 71.

“I was just hitting my irons really well. Had a bunch of birdie putts that were within 10-feet,” Cracraft said.

He also works at MCC in the pro shop and takes care of the golf carts.

“Hopefully we can put a trophy or something in the pro shop,” Cracraft added.

Feldhaus chipped in on No. 18 for birdie to earn himself a shot at the playoff. The playoff hole did not start well for him, his tee shot going out-of-bounds on No. 18 while Maruishi was right of the fairway.

Feldhaus was able to hit his third shot to the back fringe of the green, getting up and down for bogey.

“I was a little nervous, snap hooked my tee shot in the weeds. Figured I could still make par, get it on the green and get up and down. He (Maruishi) had a really tough chip on his fourth shot and I felt really good after that,” Feldhaus said. “It was really cool to see Trey win though. We played golf all summer and we all know what he’s capable of and he showed it today. Hopefully I’m next to get a win. I’m hungry for it.”

Maruishi hit the trees with his second shot, but got a favorable bounce as the ball landed just short of the green. But his third shot went past the green, a little past Feldhaus’ ball, his fourth would then roll past the green, leaving Feldhaus in prime position to win the playoff from just a few feet out for his bogey putt.

He’d sink it, giving the Royals a 1-2 individual finish on the day as well as the winning Cup trophy, one Cracraft and others got to drink Gatorade from afterwards.

“We’re moving. Our ultimate goal is to be under 300 each tournament. Our first two tournaments was a learning curve, got some experience and think we’re grooving right now. The course was tough today, only one player under par and the pin locations were tough with a very firm course,” Bennett said.

The Royals will look to continue their success on Monday when they play in the Ashland Invitational at Bellefonte Country Club.

After Great Crossing in second with a 310, Russell finished third in the team scoring with a 324, Highlands fourth with a 329 and Harrison County rounding out the top five with a 350.

Fleming County tied for 10th with a 370, led by Seth Hickerson’s 75, which was good for a tie for fifth. Hickerson has put a couple solid rounds together, shooting a 71 on Thursday at the Cardinal Championship at Winchester Country Club.

Adam Hargett carded an 88 for the Panthers, Parker Sills with a 96, Chase Grannis a 111 and Kaine Roberts with a 113.

Mason County also had their “B” team participate led by Ryan Skaggs with an 84. Grant Burkhart closed with a 91, Cole Owens a 102, Jaxen Crabtree a 108 and Joseph Hazlett with a 115.