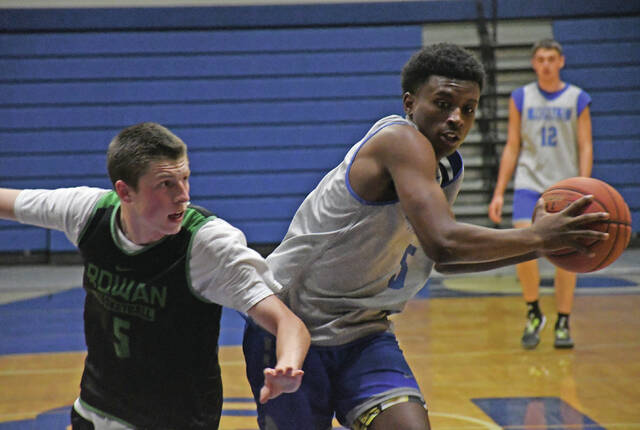 Nearing the end of June signals the end of summer high school basketball.

Mason County played their last summer game on Tuesday against Rowan County, the program hitting a pause for a little bit as dead period lurks and a summer break comes before getting things started back when school pops around.

The Royals had what they consider a successful summer, winning the Gold Bracket of the Mack, Miller and Lofton tournament in Lexington and playing quality competition elsewhere.

But summer isn’t about wins and losses and for Mason County and many other programs across the state, it’s about developing and finding replacements for the graduating seniors.

For Mason County, the Royals got a welcome surprise in the spring when Riley Mastin enrolled, coming over from Augusta. Mastin, at 6-foot-6 brings an inside presence for the Royals that they haven’t really had since Alex Schalch in the 2019-20 season.

“I knew most of these guys already playing against them the last two years. The first couple of games was kind of rough you know, getting to learn to play with each other. We started clicking a little bit and we’ve played really well these last two weeks,” Mastin said, who got a taste of what he needs to work on. “My games got to get faster. It’s so much quicker here. I enjoy it, running the floor. I’m going to have to step up my game a little bit, especially on the defensive end. One of the first things Kirk told me is if I want to play I’m going to have to play defense a little bit.”

Mastin heads into his senior season and will be a vital piece to the Royals program for the upcoming season. It will also bring a challenge for Kirk and the style of play they’ve implemented the past few seasons, the uptempo style they’ve presented with more smaller, guard oriented lineups.

“As a coach I like challenges, that’s always been my mindset. If we’re not being challenged are we getting any better? And I think our kids think that way too,” Kirk said. “It will be a lot different. But I think some of our kids see how much that’s going to help them of maybe the pressure that he can relieve being a big target in the middle. When teams play a zone his ability to stretch the floor, his shooting ability is really going to help us tremendously. So I mean, as a whole it’s going to help everybody on the floor of just having his presence out there.”

The Royals closed out the summer with a 82-45 victory over Rowan County, sharing the ball around and many getting shots up.

“The kids have been very unselfish. They really like to see their teammate shine. If we understand that we can play that way throughout the course of the season, that some nights you may get three or four shots, next night you may get 10 or 15, we’re going to attack those mismatches. We want to put our kids in positions, put them on in positions on the floor to be creative, make plays and that’s what we expect out of our kids,” Kirk said.

Headed into the offseason, depth was one of the biggest questions for the Royals. With Nate Mitchell and Mason Butler graduated, Kirk used this summer to see who might be some candidates to fill their spots, as well as Julius Booker.

Early returns tell Kirk he’s confident with what he can replace them with.

“Connor Butler has played extremely well. It must be the Butler name when it comes to defensive mentality. When he’s on the floor it feels like the speed of the game is in our favor. Carter McClanahan has been playing with a lot of confidence,” Kirk said. “Overall very pleased with our guys throughout the course of the summer. A lot of big strides in a lot of our guys and we’re excited looking forward.”

Isaac Marshall also returned to the team in the summer after deciding not to play his junior season. Marshall along with Landon Scilley, who has put a lot of focus on baseball in the summer will be two more pieces to the puzzle. Garryon McClain has been getting some action at varsity as well after playing JV last season.

Add in first team All-Region player Terrell Henry with returnees Philip Bierley, KG Walton and Braylon Hamilton, the Royals will once again have the nucleus to be a contender to win the 10th Region.

But for now, a break awaits.

“Kids need to be kids. You know, I think sometimes as even parents, as adults, as coaches, sometimes we get caught up in the moment and we don’t let the kids enjoy, you know, the things that they’re gonna remember the most. And that’s one of the things that I stress to our kids all the time. Hey, good decisions, but it’s time to be a kid. Football players get ready for football, soccer players get ready for soccer, golf players get ready for golf. And when it’s our time to play basketball, hey, we’ll be back. But if if they’re not playing a fall sport, we’ll be offering some open gyms, some individual workouts and we’ll expect for those kids to be here. But like I said it’s time for everybody to kind of take a deep breath, relax as the season is long. So it’s important for our kids that to have that time just to be kids and enjoy life,” Kirk said.

With assistant coach Jordan Gilbert headed over to coach the Lady Royals program, Kirk filled an assistant coaching position with Owens Crawford. Crawford graduated from Augusta and played at Kentucky Christian University before getting his master’s degree at Baylor. Crawford recently moved back from Texas. Crawford was the point guard for the Augusta 2015-16 team led by Kirk, the Panthers winning the 39th District title and finishing runner-up in the region.

“It’s kind of funny how the game of basketball works. Everything kind of goes around in a circle. My first year at Augusta having him, coaching him. Just seeing the way that he’s matured and grown over the course of the years. We’re very excited to have him, he had an outstanding career at KCU. Just the things that he has learned throughout his playing days at KCU and for him to to bring that knowledge back. It’s exciting to add somebody like that to the staff and be able to reconnect with him and and help him grow and accomplish his goals and dreams that he has in mind as well too,” Kirk said.