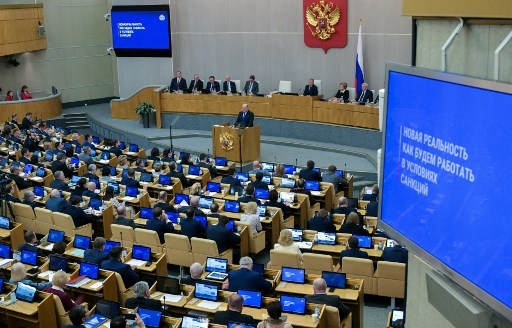 Russian authorities are moving closer to announcing a general mobilization. The State Duma of the Russian Federation introduced the concepts of “mobilization,” “martial law,” and “wartime” into the Russian Criminal Code and imposed a penalty of up to 10 years in prison for voluntary surrender.

At plenary session held on Sept. 20, the Russian State Duma adopted amendments to the Criminal Code of the Russian Federation in the second and third readings. They proposed to increase liability for certain crimes against military service. New concepts have been introduced into the Criminal Code: “voluntary surrender,” “looting,” “mobilization,” “martial law” and “wartime.” The decision was taken unanimously. The parliamentary session was broadcast on the website of the Russian State Duma.

Articles on looting and voluntary surrender were added to the Criminal Code. For surrender, one faces three to ten years in prison if there are no signs of treason. For looting – up to 15 years in prison.

The punishment for the unauthorized abandonment of a unit during mobilization and martial law has also been made more severe. For more than a month AWOL, they will be assigned five to ten years in prison (previously, it was up to five years). Failure to comply with an order during martial law or refusal to participate in hostilities will be punished with two to three years of imprisonment.

Russian reservists called up for military training will be criminally liable on an equal basis with contract soldiers and conscripts for failure to appear or desertion.

On September 21, the bill will be submitted for approval by the Federation Council.

Since the beginning of Russia’s full-scale invasion of Ukraine, many military experts have noted that it is impossible for the army to achieve the tasks set by Russian president Vladimir Putin without additional mobilization.

According to the General Vadym Skibitskyi of Ukraine’s Defense Intelligence, the topic of mobilization has been discussed by the leaders of the Russian Federation since the very beginning of the military conflict. An announcement of general mobilization would be a significant blow to Putin’s regime because it would mean recognizing that Russia has not been able to fulfill all the tasks it declared, that Putin’s so-called “special operation” has not achieved results, and a real war is being fought. Moreover, declaring a general mobilization would mean declaring war on Ukraine and recognizing that Russia is an aggressor.