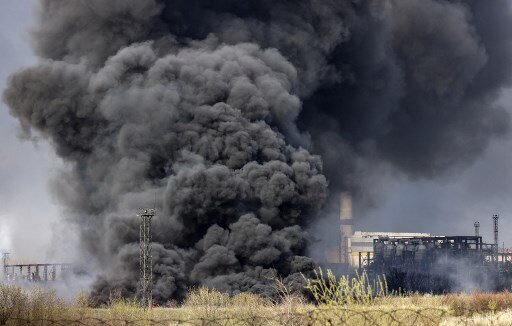 Ukraine’s entire oil sector has been forced to halt refining operations due to massive Russian shelling, Yuriy Vitrenko, the CEO of Ukrainian Oil and Gas company Naftogaz, said at a June 21 press conference in Kyiv.

The incessant shelling has made it near impossible to provide oil products to the Ukrainian market, Vitrenko said in comments broadcast on Naftogaz Ukraine’s YouTube channel.

“Unfortunately, these strikes began in the first days of the war,” Vitrenko said.

“All oil refining in Ukraine is now shut down due to massive repeated attacks by the aggressor, and it’s difficult to ensure the supply of oil products to the Ukrainian market, which is the reason for the shortage,” Vitrenko said.

Addressing potential solutions to the problem, Vitrenko said that Ukrainian authorities have set out to make Naftogaz the national operator for Ukraine’s oil products market.

“When Naftogaz has full management, a network of gas stations, and when the problem with logistics is solved, then we’ll have a way to create a national reserve of petroleum products, and Naftogaz will be able to solve problems in the fuel market, ensure stability, transparency and fair prices.”

Fuel shortage appeared in Ukraine at the end of April, due in large part to the destruction by Russia of Ukrainian oil depots and the Kremenchuk refinery, the absence of supplies from the Russian Federation, as well as Russian blocking imports by sea, the head of the Parliament committee on energy, housing and communal services, Andriy Gerus, said.

First Vice Prime Minister and Minister of the Economy Yulia Svyrydenko said April 29 that the problem would be resolved within a week.

In May, Ukraine’s Cabinet of Ministers decided to suspend state regulation of fuel prices. In June, so-called “green corridors” were agreed for the import of fuel into Ukraine from the EU using fuel trucks.

On June 13, Svyrydenko announced that Ukraine planned to increase the import of gasoline and diesel fuel in June by 60% compared to May by up to 600,000 tons.