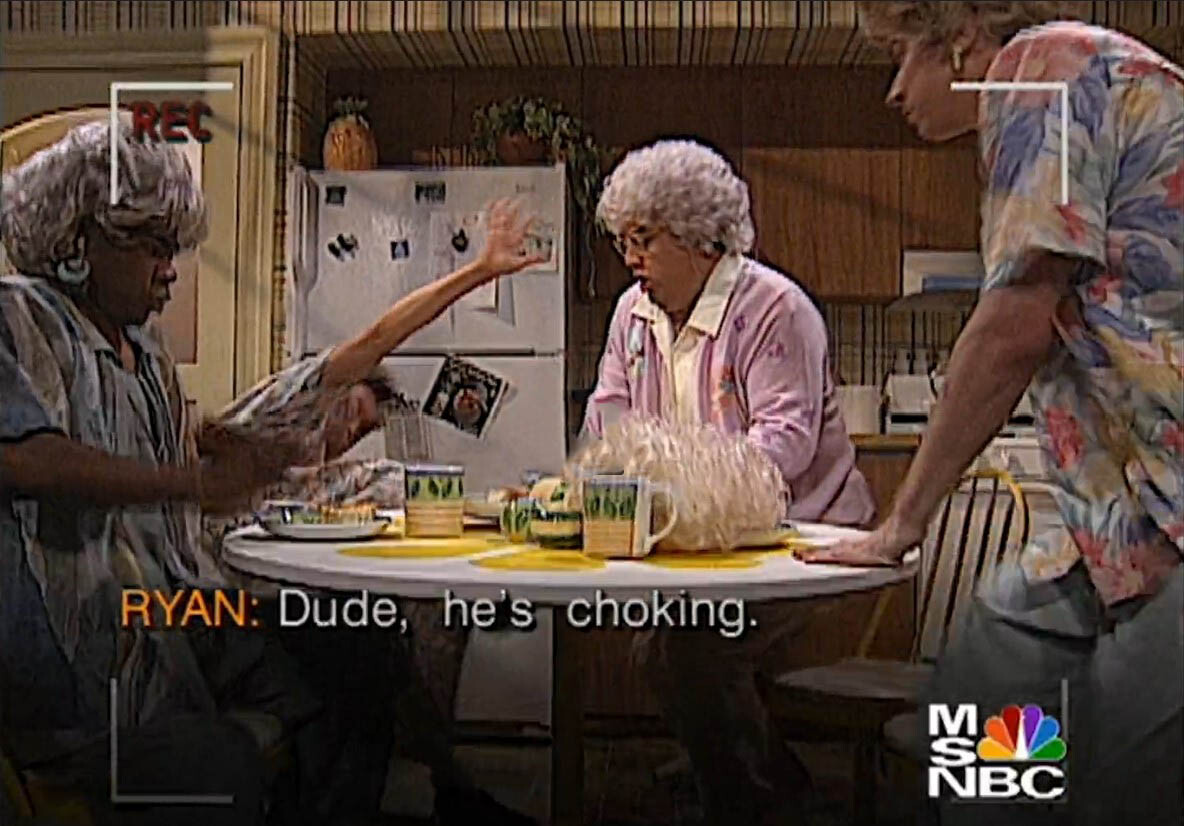 Um … didn’t that hurt? “I didn’t feel the pain when it was going on,” Shannon told David Spade and Dana Carvey on their Fly on the Wall podcast. “But then the next day when I would wake up, I would have cuts and bruises. But I also liked it because I feel like I threw myself into the character. I really did want to perform and be physical, and be ‘like the boys’ when I started.”

Some of that physical frenzy was a way for Shannon to deal with stage anxiety. “It also helped me pour my nervous energy into the character. Because I was so nervous, the physical aspect of it felt like a release.”

Probably no one has suffered more from his physical comedy than Kattan, who claims to have literally broken his neck on the 30 Rock stage.

According to Kattan, the injury happened during a sketch about a group of kids who roleplay as The Golden Girls. One planned laugh required Kattan to fall backwards in his chair — a move that he says caused him to bang his skull on the stage.

His neck, understandably, was sore, a pain Kattan assumed would go away.  Instead it got worse, eventually leading to five surgeries.  For some reason, he never told his SNL bosses about the injury until years later, meaning workers’ compensation was no longer an option. For their part, SNL staffers say they were unaware that Kattan had suffered an accident.

John Belushi’s Samurai character was famous for waving his big-ass sword around–it was inevitable that it would eventually find someone’s face.  That someone was host Buck Henry.

“In ‘Samurai Stockbroker,’ he cut my head open with the sword, but it was really my fault; I leaned in at the wrong time,” says Henry. “And I bled all over the set. It was a very amusing moment. You would not believe how much blood from a forehead was on that floor.”

During the commercial break, Belushi’s personal doctor, who suspiciously happened to be in the audience, clamped the wound shut.  Chevy Chase came out for Weekend Update 10 minutes later with a bandage on his face, followed by Jane Curtin with her arm in a sling.  It wasn’t sympathy, but it was comic solidarity.

Henry later regretted turning his gory head away from the audience (although you can definitely see his bleeding noggin if you watch the sketch.  The blood starts a-gushin’ at the 4:07 mark).  Instead, he wished that he’d walked directly toward the camera to prove that on live television, anything, including bloodshed, can happen.

For more ComedyNerd, be sure to check out:

6 Secret Rules for Writing Comedy For the MCU

The ComedyNerd newsletter is your weekly look at the world of stand up, sketch, and more. Sign up now!