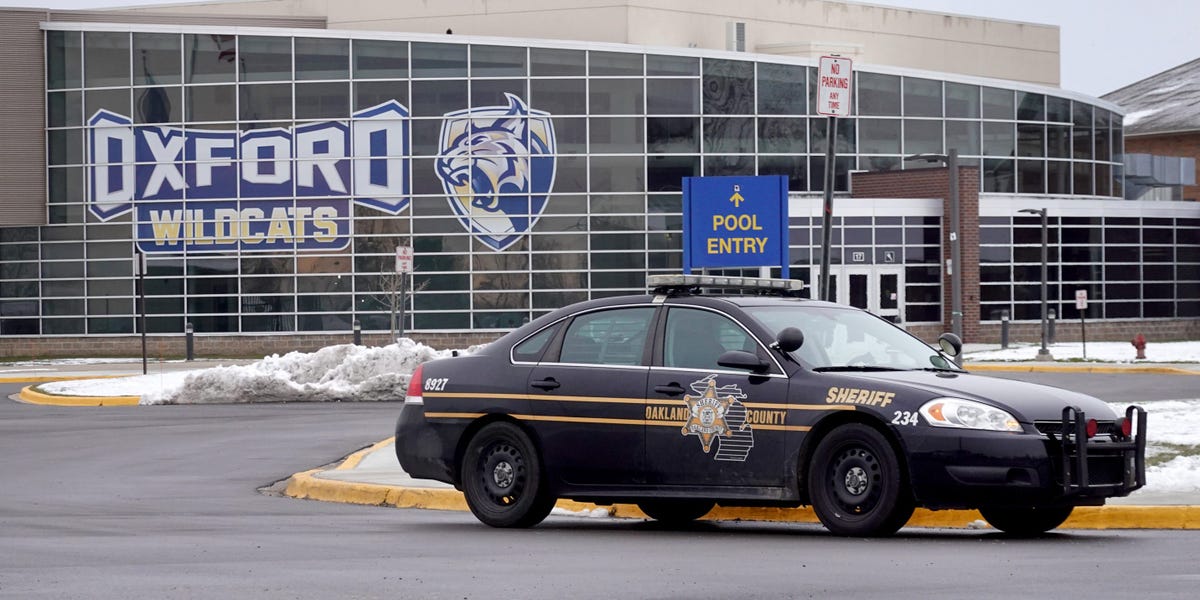 The suspect in the Oxford High School shooting told school counselors disturbing drawings and notes he made were for a video game he was designing, according to a letter sent by school officials and obtained by ABC News.

At a news conference on Friday, Oakland County Prosecutor Karen McDonald said a teacher spotted the drawings Tuesday on the desk of Ethan Crumbley, the sole suspect in the shooting that left four students dead later that day. The teacher took a photo of the note and reported it to the school.

The note included “a drawing of a semiautomatic handgun, pointing at the words: ‘The thoughts won’t stop. Help me,'” McDonald said. There was also a drawing of a person with gunshot wounds who was bleeding, as well as a drawing of a bullet and the words “blood everywhere.”

McDonald said there was also a drawing of a laughing emoji and the words “My life is useless” and “The world is dead.”

After the note was found, Crumbley was removed from class and James and Jennifer Crumbley, the 15-year-old’s parents, were called into the school, prosecutors said.

The couple was told their son needed to get counseling within two days and were asked to bring him home for the day, but they refused to do so, according to McDonald.

Crumbley returned to a classroom before the shooting occurred. Prosecutors said he had the gun with him at school, but it’s unclear if it was on him, in his backpack, or somewhere else.

On Saturday, Tim Throne, Oxford Community Schools superintendent, sent a letter to the school community with additional details on the Tuesday morning meeting, ABC reported. The letter said Crumbley told the school guidance counselors that he wanted to be a video game designer and that the drawings were for a game he was creating.

“At no time did counselors believe the student might harm others based on his behavior, responses, and demeanor, which appeared calm,” Throne said, according to ABC. He said at no point in the meeting did the Crumbleys’ answers to the schools’ questions indicate the boy was a threat.

“The student’s parents never advised the school district that he had direct access to a firearm or that they had recently purchased a firearm for him,” Throne said.

He also reiterated the prosecutor’s statement that the Crumbleys declined to take their son home from school despite being asked to do so.

The Crumbleys have also been charged in the shooting and are facing four counts each of involuntary manslaughter. They were arrested early Saturday morning after an extensive manhunt that began when they failed to appear in court.

They pleaded not guilty on Saturday.

Throne and Oxford Principal Steven Wolf did not immediately respond to Insider’s requests for comment.

Have a news tip? Contact this reporter at kvlamis@insider.com.