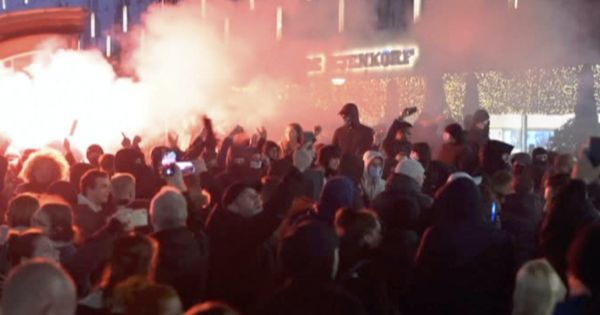 Scores of protesters were wounded or arrested by police Friday in Rotterdam as people took to the streets in response to the Government’s intentions to impose harsh, restrictive measures to curb the number of COVID-19 cases.

There were also unconfirmed reports of deaths resulting from police violence.

Dozens of people were arrested and seven injured, including police officers, during protests against COVID-19 restrictions in which a police car war burned and stones were thrown at law enforcement officers.

The protests erupted in rejection of coronavirus restrictions and government plans to restrict access to some sites for unvaccinated citizens.

According to a statement from the local police, the demonstration began on Coolsingel Street and ended in riots. Fires were declared in several places. Fireworks were launched and the police fired several warning shots.

Dutch Prime Minister Mark Rutte had announced Nov. 12 the reintroduction of partial confinement together with a series of sanitary restrictions to halt the spread of the coronavirus, whereby bars and restaurants must close at 8:00 p.m. at least until December 4.

Police had used a water cannon to disperse protesters in The Hague on the day the measures were announced.

Last weekend, police had also detained 15 people in a northern city after clashes broke out between security forces and hundreds of people outraged by the early closure of bars due to the pandemic.

At least one police vehicle was set on fire during the protest, a police spokesman said.

This is a very serious situation that requires the action of the highest priority, Rotterdam authorities said. Therefore it is necessary to issue this emergency order to maintain public order and protect the safety of people.

The Netherlands reimposed restrictions after a rebound in COVID-19 cases to record levels, with more than 21,000 new infections reported Friday.

As per the new restrictions, people were asked to once again work from home, unless it was necessary to do it otherwise.

Public events were suspended and football returned to being played behind closed doors.

However, schools remain open and there is no actual ban on people leaving their homes.

The Dutch Government has said it would review the situation on December 3 and was considering banning unvaccinated people from bars and restaurants, although the plan faces strong opposition in parliament.