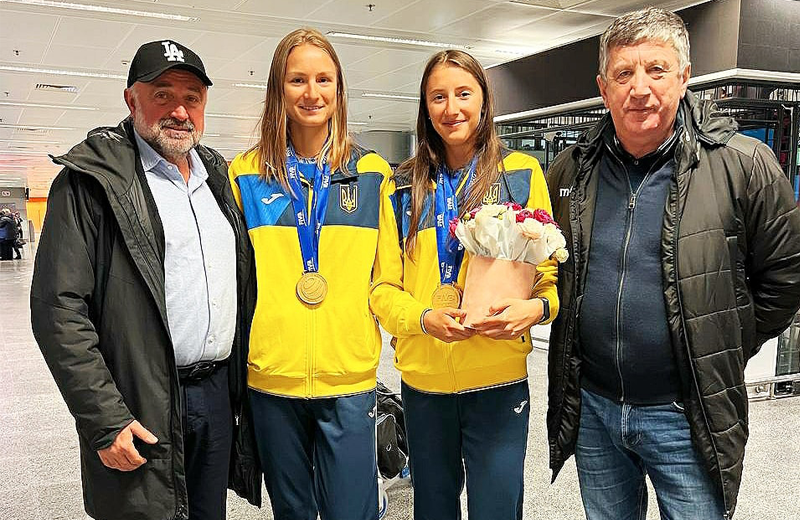 Ukrainian teens take the beach volleyball world by storm by smashing their way to their first world title on a sunny Thai beach.

Anhelina Khmil and Tetiana Lazarenko – you might want to jot these names down.

The 18-year-old teen sensations returned yesterday from Thailand with the U21 world championship – the first for any Ukrainian beach volleyball duo.

“They deserve fanatical devotion”, said a gushing social media post by the Ukrainian Volleyball Federation after their return to Ukraine. “[Their] insane ability to work, unwavering faith in their own strength and, finally, the bright game that they demonstrated in Phuket, Thailand … the whole world sincerely applauds them.”

Seeded No. 21 coming into the tournament, the young women were on fire playing against teams a few years older.

The duo from Zaporizhzhia went through the qualifying round undefeated and then didn’t drop a set in the quarter- and semi-finals against No. 3-seeded Russia and No. 6-seeded Switzerland.

They faced a tougher challenge in the final, where they faced the No. 3-seeded team of Spain, Daniela Alvarez Mendoza and Sofia Gonzalez Racero.

After winning the first set 21-17, Khmil and Lazerenko missed their first opportunity to clinch gold by dropping the second set 18-21, setting up the dramatics of set No. 3.

In one of the year’s great comebacks and showing resiliency that belies their young ages, the girls fought off three match points before winning gold in dramatic fashion 17-15.

Wild celebration on return to Ukraine

The win capped a wildly successful year for the team, who have already have eight international medals under their belts, including the 2020 U18 European championship and a top level FIVB Beach Volleyball World Tour title in Sofia this summer.

Such success so early in their careers has the Ukrainian Volleyball Federation clearly elated.

“We didn’t really believe in the possibility of them winning medals as, while strong at the European level, this was a worldwide event. More than that, to fight at such a level with venerable duos 1-2 years older is a very difficult task”, the federation said in a statement afterwards.

“However there was no doubt that the girls would storm the world’s top teams with the utmost ambition and perseverance – because this is exactly the character of these athletes – ambitious and persistent!”

Upon their return to Ukraine, Khmil and Lazarenko were greeted at Boryspil Airport by Ukrainian Volleyball Federation president Mykhailo Melnyk and vice-president Andriy Lopushansky, among other friends, family, and fans.

In honour of their success, the team received flowers, monetary prizes, and a relaxing vacation to Ukraine’s luxurious Truskavets Spa Hotel Geneva.

To relive Khmil and Lazarenko’s dramatic win in Thailand, you can view the video on YouTube

To see the welcome the girls received upon returning to Ukraine, check out this post by the Ukrainian Volleyball Federation