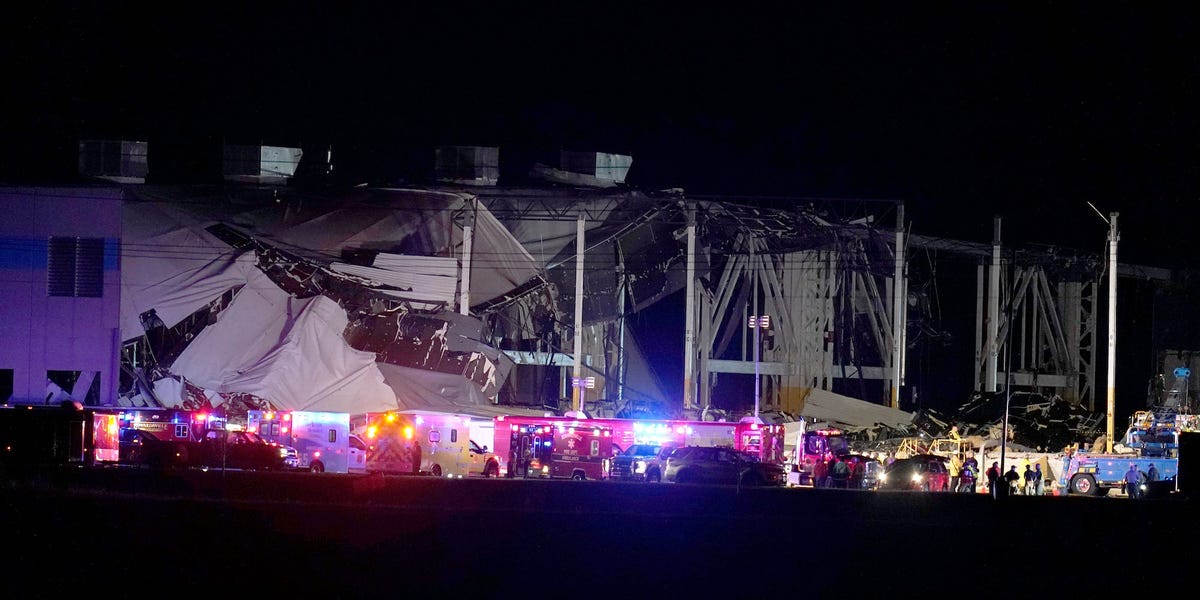 An Amazon warehouse in Collinsville, Illinois, has collapsed due to severe weather.

In a statement to Insider, Edwardsville Police confirmed that there are fatalities, however, they are unable to state the exact number.

On their Facebook, the Collinsville Emergency Management Agency stated that "subjects were trapped inside" and described the event as a "mass casualty incident."

Authorities have confirmed a search and rescue operation is in place, Reuters reports.

A powerful storm created at least 19 tornadoes across five states

A storm going through the middle of the country has created tornadoes that hit Arkansas, Illinois, Tennesse, Kentucky, and Missouri, CNN reported.

One person was killed and five others were seriously injured when a wedge tornado struck a nursing home in Monette, Arkansas, on Friday night.

Kentucky State Police said tornados spreading in the western part of the state caused significant damage and while there are fatalities reported as of Friday night, they are anticipating some.

An Amazon warehouse was damaged in Edwardsville, Illinois.

CNN reported that several structures in Tennessee were also damaged.

Sheila O'Connor, a reporter with Fox13 Memphis reported that close to 18,000 people in Memphis were without power on Friday night.

One person was killed and five others were seriously injured when a tornado struck the roof of skilled nursing facility Monette Manor, in Monette, Arkansas on Friday night.

At least 20 people were also trapped inside.

Craighead County Judge Marvin Day asked residents of the facility to shelter in place and declared a state of emergency.

Following his declaration of a state of emergency, Kentucky Gov. Andy Beshear deployed state police and the National Guard in the early hours of Saturday morning after a severe tornado event caused major damage throughout several western counties.

Although no casualties have been reported, Kentucky State Police tweeted around 1 a.m. on Saturday morning that "loss of life is expected."

On Friday night, an Amazon distribution center in Edwardsville, Illinois, was severely damaged by a tornado that caused its roof to collapse and trap hundreds of employees inside. First responders descended on the warehouse to assist with the rescue mission.

Approximately three hours after the collapse was reported, 46 Amazon workers who had been rescued from the building were bussed by Madison County Transit to the Pontoon Beach Police Department, KMOV reported. Reporter Jenna Rae, who was on the scene, tweeted that a life flight helicopter had landed near the facility.

When KMOV reached out to Amazon for comment, spokesperson Richard Rocha offered the following statement: "The safety and well-being of our employees and partners is our top priority right now. We're assessing the situation and will share additional information when it's available."