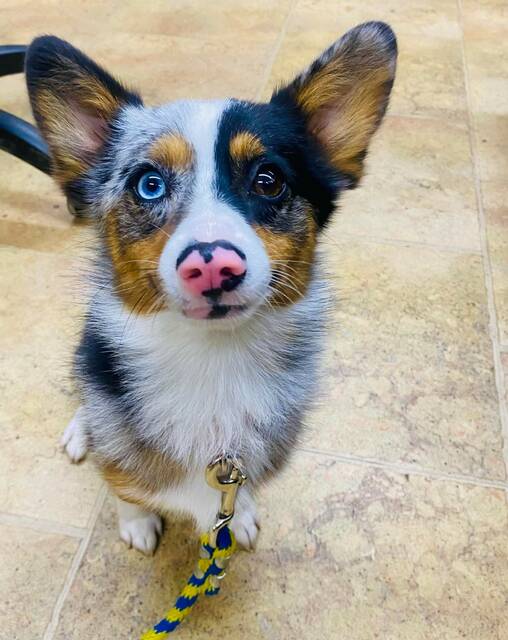 Brandon Browning and Justyce Small’s problem began on the last weekend of July when the couple set off for a horse sale in Ohio, leaving their usual dog sitter in charge of their beloved pets.

Browning and Small, Flemingsburg residents, bought Puddles, a 2 1/2-year-old Australian shepherd/corgi mix for $1,200 when he was just an eight-week-old puppy.

Unbeknownst to them, their sitter thought the couple had taken Puddles along on the trip. Somehow, Puddles had escaped. Because of this simple miscommunication, Puddles disappearance wasn’t immediately noted. He was later picked up by a Good Samaritan and taken to the Mason County Animal Shelter on the afternoon of July 30.

Puddles was accepted by the facility and pursuant to KRS-258.215, a five-day minimum holding period began.

By Monday, Browning and Small realized Puddles was missing and were alerted to his whereabouts on the Flemingsburg buy/sale Facebook page. When Tuesday morning rolled around, they hurried to shelter to be there when the facility opened.

Browning explained to shelter staff how his dog was missing and believed the pup had ended up in the shelter. Bill Howell, the MCAS manager, gave Browning a tour of the kennels and Puddles wasn’t in any of them.

According to Browning, Howell went to look for Puddle’s intake paperwork and part-time employee, Erik Cox, came in and said he didn’t know where Browning’s dog was.

“I told them I’m not leaving until you find my dog,” Browning said.

During the time Browning and Small waited for Howell to search for documents and call volunteers, Browning had a strange conversation with Cox. Cox talked about being a single dad with two kids and allegedly said, “I’m going to lose my job over this.” It was at that time that Cox offered to pay Browning for the loss of his dog.

“I told him I didn’t want money, I wanted my dog,” Browning said.

Browning then learned that his dog had been adopted out, but there wasn’t any paperwork showing the adoption.

Understandably, Browning was frustrated and said he told Howell and Cox at that time, “One of you two know where my dog is, and you better get him back.”

Cox, who has a lengthy criminal record, having been booked into the Mason County Detention Center 26 times for various offenses before taking the shelter job, reiterated that he didn’t know where Puddles was.

Judge-Executive, Owen McNeill, arrived on scene and promised Browning and Small to get to the bottom of this.

“I was alerted that a dog turned into the Mason County Animal Shelter was apparently missing by our staff. I went up, along with our treasurer, Kim Muse,” McNeill said.

Small posted the alarming news that Puddles had been adopted out after only 12 hours in the facility and without the mandatory stray hold period. Her plea garnered instant support and the sharing of the post began.

But it wasn’t until Daniel Sammons, a Maysville resident, saw Puddle’s picture on Facebook and noticed the striking resemblance to a photo of a dog that had been shown to him, that there was a breakthrough in the search for the missing dog. He knew who the people were.

“I went over there personally, worried that Puddles might disappear forever,” Sammons said.

When he arrived, Sammons said he discovered two dogs had been sold to the family for $100 by Cox, who then allegedly pocketed the cash. One of those dogs was Puddles.

Sammons contacted McNeill, who Sammons said then rushed to the Maysville house with Muse to retrieve Puddles. Sammons said he ended up giving the people the $100 himself to expedite the matter.

McNeill acknowledged that Sammons was instrumental in locating Puddles.

“We’re very happy to have him back,” Browning said, adding, “But I still want to do something about it.”

Mason County Sheriff Patrick Boggs confirmed that a criminal investigation, led by Chief Deputy Ryan Swolsky, is ongoing and couldn’t speak about the specifics of the case.

Boggs said his office does not act in a dog warden capacity.

“We signed a contract with the Fiscal Court to pick up dogs and drop them off at the shelter. We simply pick up and drop off,” he said.

Boggs also said there could possibly be administrative violations at the shelter, which was not his purview.

“No one has been charged and it is under investigation. If there is enough evidence, then someone or multiple people will be charged,” he said.

As of Thursday morning, Swolsky said he was still investigating, and evidence had been sent to the county attorney’s office.

“Tuesday’s incident is certainly regrettable, however, I’m optimistic for our MCAS to continue to improve,” McNeill said.

He is positive about the MCAS even with recent events, the county’s chief officer said.

“I’m always looking to better all of our operations across Mason County.” McNeill said. “We’re working to build momentum there at the shelter that has been a bit under water for several administrations. Barbara Bern, our volunteer coordinator, and our team is working on putting together a policy and procedural manual and we’re talking to nationally accredited humane society and animal control experts.”

While he is pleased with his employees, McNeill said he realizes there are some issues to be addressed.

When contacted, Howell, the shelter’s manager, said he was told that the county’s media policy forbade him from discussing Puddles and that all questions should be addressed to McNeill.

However, Howell expressed a desire to discuss the matter, and when asked about employee Cox’s roll in the disappearance of the dog, he muttered, “I don’t know what he was thinking.”

Howell also said he was going to look into the second dog’s situation and make sure that legitimate paperwork is filled out, since it appears that dog was also taken out of the shelter without proper protocol.

While Browning and Small are thrilled to have Puddles home safe and sound, they’re still greatly concerned about what happened to their dog. That concern prompted the couple to visit the Boggs’ office and fill out a report.

“I feel like if I didn’t do something, someone else will be in the same predicament,” Browning said.

The incident involving Puddles the dog is the most recent to plague the shelter. Over the past few weeks a dog sent there for isolation after biting a woman died for no apparent reason, an employee was arrested on a warrant from northern Kentucky for a parole violation, and a cooperative program with the jail was discontinued after some questionable events.