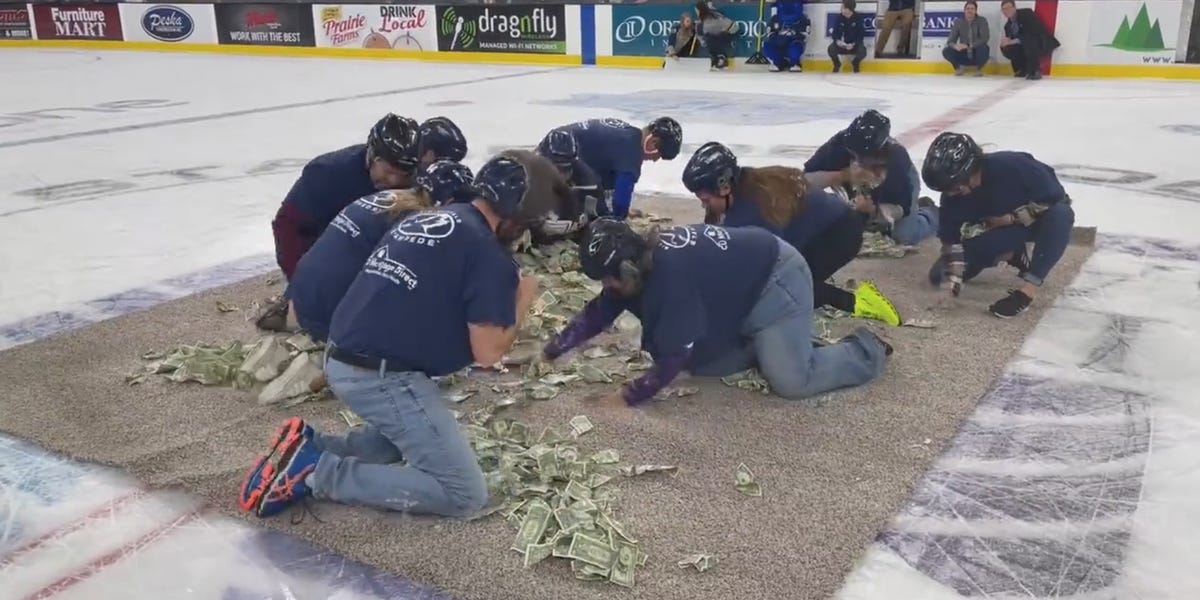 Teachers in South Dakota were pitted against each other in a “Dash for Cash” event, where they knelt on mats and tried to grab as many dollar bills as possible within five minutes.

A total $5,000 pot of cash donated by a local Sioux Falls mortgage lender CU Mortgage Direct, was up for grabs. Videos showed the teachers crawling across a mat with the dollar bills strewn across it, stuffing the cash into their clothes, and grabbing as much as they could.

The event, held on Saturday at the Sioux Falls Stampede junior ice hockey game at the Denny Sanford Premier Center, was first reported by local publication Sioux Falls Argus Leader. Ten teachers fought to snatch as much of the prize money as possible, with the cash going to their classroom funds.

“With everything that has gone on for the last couple of years with teachers and everything, we thought it was an awesome group thing to do for the teachers,” Ryan Knudson, business development and marketing director at CU Mortgage Direct, told the Sioux Falls Argus Leader. “The teachers in this area, and any teacher, they deserve whatever the heck they get.”

CU Mortgage Direct did not immediately respond to a request for comment from Insider.

Harrisburg High School teacher Barry Longden, who managed to snag $616 — the highest amount grabbed from the prize pile — told the news outlet that he was planning to use the money to help buy equipment for his school’s 30-member e-sports club.

“I’ve been throwing my name in the hat everywhere I can find so that way I can get opportunities to get money for the kids,” Longden said.

Alexandria Kuyper, a fifth-grade teacher at Discovery Elementary School, managed to grab $592 from the stack. She told the Sioux Falls Argus Leader that while she can ask for grants to fund classroom items, smaller items like holiday decorations can incur extra costs that add up.

In response to the original video posted by Annie Todd, reporter at the Sioux Falls Argus Leader, Twitter users called the cash grab “degrading” and “dystopian,”  likening it to beggars being tossed crusts of bread.

“To entertain hockey fans in Sioux Falls, they have teachers run across ice in a desperate scramble for $ to equip their classrooms. We’re just a few sharpened sticks away from public education ‘Squid Game,'” tweeted CNN anchor Bill Weir.

Insider reported in May that South Dakotan teachers were paid an average salary of $49,220 during the 2019-2020 school year. The state ranks 49th in teacher pay among the 50 states and the District of Columbia, just ahead of bottom-ranked Mississippi, with a salary of $45,192, and Florida, which averages $48,800 in teacher pay.

Poor funding has left teachers regularly asking for donations for classroom supplies. In 2019, teachers started appealing to strangers for funds via the viral hashtag #clearthelists. During this campaign, people rallied to crowdfund cash to help teachers pay for items on their back-to-school wish list.

That same year, Insider looked into how much teachers spend on classroom supplies from their own salaries, speaking to 31 teachers across 19 different states, some of whom admitted to spending as much as $1,000 on their classrooms.