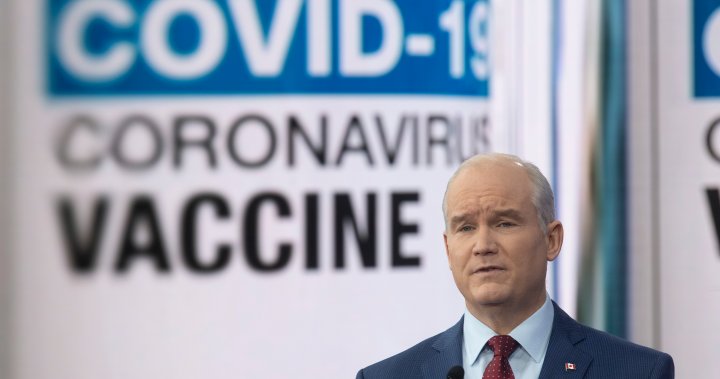 It is statistically unlikely multiple Conservative members of Parliament have valid medical reasons not to get vaccinated against COVID-19, Government House Leader Mark Holland said on Monday.

All MPs must be vaccinated against COVID-19 if they want to sit in person in the House of Commons, the Board of Internal Economy ruled last month, unless they have a valid medical exemption that has been shown to House administration.

While there is “some possibility” multiple Conservative members are medically exempt to COVID-19 vaccination, there is also “a possibility that chair could fly,” Holland told reporters, referring to a chair in the room.

“We have to be realistic here.”

Medically exempt unvaccinated MPs can enter the House of Commons with a recent negative COVID-19 test.

The process the House of Commons is using to verify the validity of those medical exemptions remains unclear. Still, Holland said he has doubts about the likelihood multiple Conservative MPs are truly medically exempt from vaccination.

Global News has contacted the Speakers’ office to ask about the standards for proving a medical exemption, as well as what conditions are valid as medical exemptions. A spokesperson for the office promised to provide further details, but hadn’t by the time of publication.

As a result, the number of Conservative MPs claiming to have an exemption also remains unclear.

“From the Chief Medical Officers of Health, the likelihood that you have a medical exemption from a vaccination is one to five in 100,000. The Conservative Caucus is 119 people,” Holland said.

“Statistically, the likelihood that they would have multiple people who are exempt on that basis is extraordinarily low.”

Conservative Deputy Leader Candice Bergen fired back at Holland in a statement sent to Global News, saying the House leader was “disparaging the House of Commons officials and medical experts tasked with overseeing the vaccination verification process.”

In a letter sent in early November, obtained by Global News, MPs and staff with medical exemptions for the COVID-19 vaccine were told to contact Members’ HR services. The letter was signed by the House of Commons Sergeant at Arms.

House administration is the body receiving the medical exemptions from MPs, Holland said, but the process for verifying them hasn’t yet been clarified.

“The same process applied to all MPs, staff and members of the press gallery. You show proof of vaccination,” said Heather Bradley, a spokesperson for the Speaker’s office, in an emailed statement.

All MPs have shared “what is needed” so they can access the parliament buildings, she said.

“We do not expect any issues,” she said.

Read more:
MPs will need to be fully vaccinated against COVID-19 to enter House of Commons next month

“Then all we have to do is agree that the letter that would come from any member asking for a medical exemption, that the doctor would attest that it is….one of those (exemptions) that is in fact legitimate,” Holland said.

Conservative Leader Erin O’Toole, on the other hand, has never stated clearly how many of his MPs remain unvaccinated.

11:51
All Conservative MPs must be vaccinated or have medical exemptions: O’Toole

All Conservative MPs must be vaccinated or have medical exemptions: O’Toole

Late last month, sources told Global News a “handful” of Conservatives remained unvaccinated — with the current assumption putting the number between three and five MPs who remain unprotected against COVID-19.

Speaking to The West Block’s Mercedes Stephenson Sunday, O’Toole confirmed all Conservative MPs “will be vaccinated or will have a medical exemption” by Monday.

“We’ve said for many months, Mercedes, that when we return to Parliament, and that’s coming now this week, we will be ready to serve,” O’Toole said.

“All the MPs will be vaccinated, or will have a medical exemption, following the rules as we’ve always tried to follow the rules from the beginning of the pandemic.”

Speaking Monday, Holland said knowing the exact number of Conservatives who remain unvaccinated is “important” to him.

“It is important knowing what what assurances the Conservative Party can give us that these individuals have valid medical exemptions,” he added.

“It’s important for people to feel safe here, and it’s frustrating to me that they would not provide that information.”