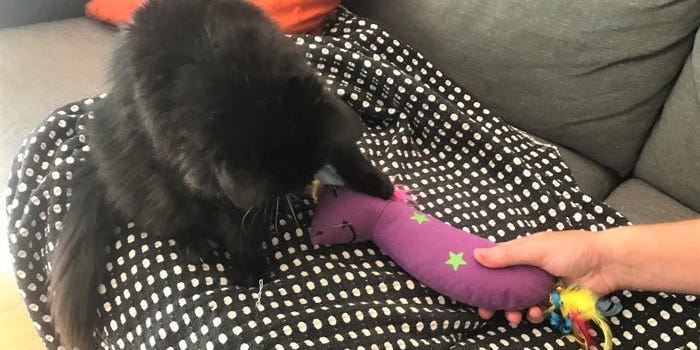 Johnson cautions that many toys are designed to appeal to humans rather than a cat’s prey instincts. “Avoid giant objects, loud toys and, honestly, bells scare a lot of cats,” she says. “Look for small bugs, small mice, and feather attachments that have a nice natural fluid movement. Look for prey that actually looks like something a cat would kill in the wild.”

What is the best toy for a bored cat?

You are! “Although we think of cats as relatively solitary creatures, they are actually very social,” says Moffatt. “Toys are great but they don’t fulfill that social need. Owners need to play with their cats.” When you can’t take the time to engage with them, Geller recommends using puzzle feeders and interactive cat toys to provide extra stimulation.

Do cats need a lot of toys?

Cats can make just about any small, lightweight object into a toy so it’s not necessary to go out and spend a lot of money on them. However, because not every cat likes every toy, trying a variety of different options can help you find the best matches for their play style and energy level. Regularly rotating toys in and out of sight and refreshing them with catnip can help keep toys enticing to your cat, according to both Johnson and Geller.

Should my cats have access to toys at all times?

Yes and no. Johnson likes to litter her floor with a variety of regularly rotating “solo play” objects like mice, balls, springs, and kickers for her cats to play with when they are feeling frisky. But she recommends putting away toys that only come to life when you are part of the game between sessions. “You do not want your cat to desensitize to their toys,” she says. “What is the motivation to chase something that has been laying there dead and boring for days or weeks?”

How do you play with a cat?

Be the bug, recommends Johnson! “Evoke prey drive, move the toy away from them, hide it behind something, wiggle and squirm as if the toy has lost a limb,” she explains. “Birds do not fly at cats’ faces. Prey runs!”

When are cats most playful?

Cats are crepuscular, meaning they are most active at dawn and dusk. Engaging them in play before a morning or evening meal is likely to be more exciting than a play session after eating when they are more interested in napping, says Johnson. Plus, playing before eating taps into the natural predatory sequence of stalking, chasing, catching, and consuming.

If you can’t play with your cat in the morning and early evening, don’t give up on the activity. “Anytime that you can conduct a 10 or 15 minute play session with your cat will boost your cat’s confidence, keep her mentally sharp, and get those feel-good chemicals in her brain flowing,” says Geller.

How do you play with a shy cat?

For shy cats, Geller recommends using quiet, unintimidating toys like a plain piece of cotton string. Placing tunnels, boxes, and bags in strategic locations gives them places to hide while you play.

What cat toys should you avoid?

Moffatt’s biggest concern with cat toys are small parts or decorations like tinsel that a cat may ingest, causing bowel obstruction. Geller is also concerned with laser toys. She recommends avoiding them unless you integrate other toys into the game that your cat can attack when the light lands on top. Otherwise, laser pointers and automatic laser toys can create frustration, anxiety, and confusion. “Cats expect to ‘catch and kill,’ so a cat who is teased with a laser pointer may try to attack, bite, or scratch a companion cat or humans,” Geller explains.