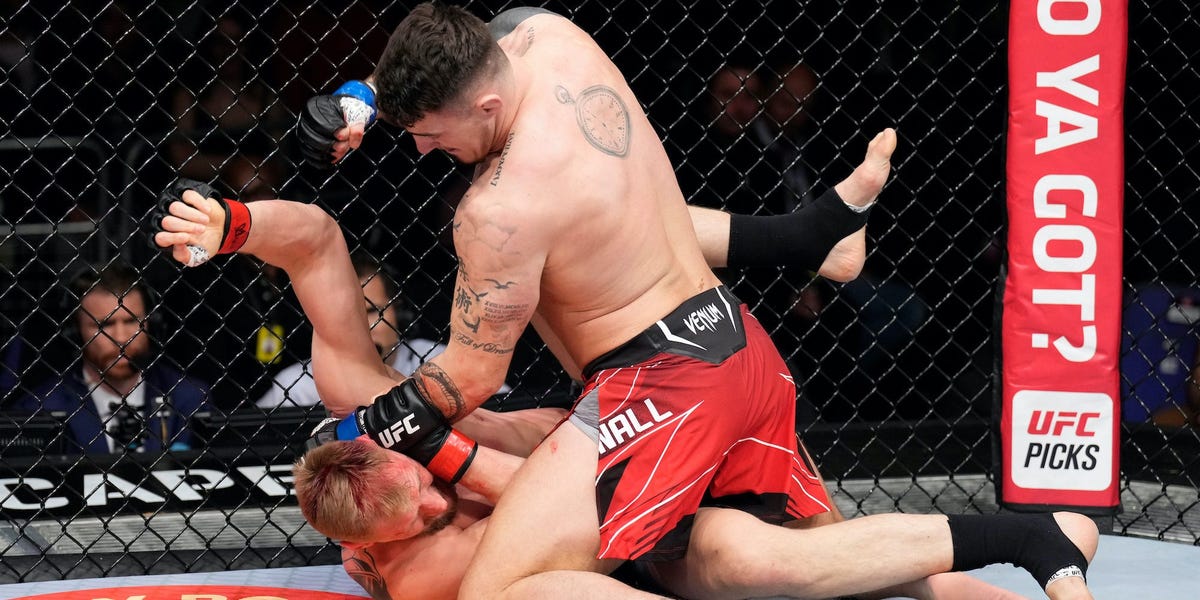 A new MMA heavyweight is emerging as one of the baddest men on the planet.

Meet Tom Aspinall, a British fighter who has been obliterating his UFC opponents left, right, and center in an abundance of ways — by knockout, and by submission.

Insider has spoken to Aspinall before and he comes across as a humble, friendly giant who is seemingly uninterested in placing himself in the top-10 of the division, and wants to progress gradually.

But after his recent run — which has seen him score five straight finishes in all his UFC assignments to date — there can be no question … Aspinall is the real deal.

Aspinall submitted Andrei Arlovski with a rear-naked choke in the second round of a February, 2021 bout before separating Sergey Spivak from his senses after 210 seconds of action later that year.

But his most recent test against Alexander Volkov at the UFC Fight Night event at the 02 Arena in London was the most impressive of the lot as he submitted the 44-match veteran with a straight armbar with apparent ease.

Final UFC statistics for the event showed Aspinall landed 35 of his 50 strikes for a 70% strike accuracy, while landing both takedowns he attempted.

He enjoyed a post-win beer before he’d even left the arena:

Earlier in the evening, women’s flyweight Molly McCann scored the most brutal, brilliant, and beautiful knockout of the year so far.

Earlier in the evening, mega bantamweight prospect Jack Shore out-pointed Timor Valiev, Paul Craig submitted Nikita Krylov with a triangle choke, and Paddy ‘The Baddy’ Pimblett scored a submission of his own to maintain his trajectory through his division.