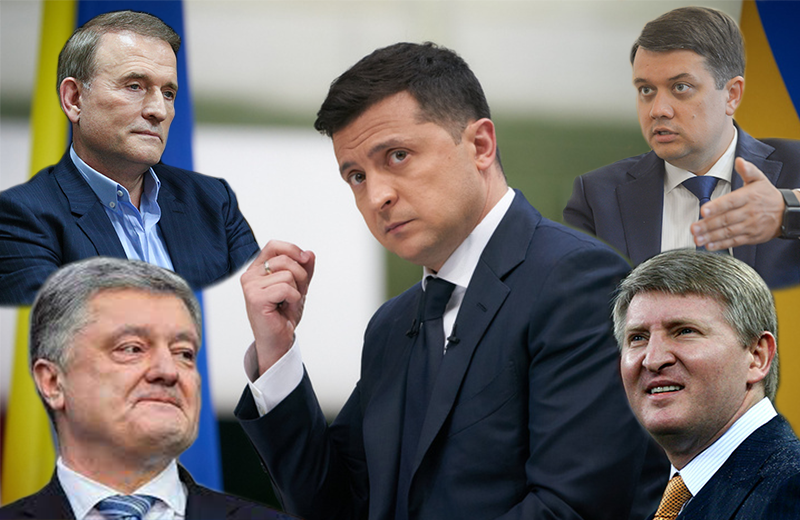 As the new year approaches, it’s customary to look back on the past year and its political developments.

Those who do so usually announce the main events, winners and losers of the year.

Let’s try to do it from a slightly different perspective and identify the key trends that have shaped the content and course of the political process in Ukraine in 2021. We will immediately see an interesting and logical chain of events and trends that distinguish the main features of the last year for Ukrainian politics.

The first trend relates to the sanctions introduced by Ukraine’s National Security and Defense Council (NSDC) against Ukrainian political figures. The sanctions against Putin’s crony, Viktor Medvedchuk, and his TV channels had an explosive effect and came as a complete surprise.

From a legal point of view, the NSDC’s sanctions were beyond its usual remit – they don’t usually apply to citizens of Ukraine. But from a political point of view, they have proved to be very effective, especially with regard to Medvedchuk and his TV channels.

The effect was immediate and strong. In my opinion, this is exactly what President Zelensky enjoyed most. He got his “magic wand” and it yielded fast and tough results. The head of state became fearsome again and this helped the president’s ratings go up. So they used this tool more, but gradually its effect weakened: the targets of the sanctions got smaller and their effect less dramatic, while the scandals grew in number.

However, it was the sanctions against Medvedchuk that reshaped the line-up of political forces (Medvedchuk’s influence decreased significantly, his personal rating fell, as did that of his political party, Opposition Platform — For Life.  as well as the structure of the information field and the TV audience along with growth of the NSDC’s role in government.

The NSDC’s sanctions gave impetus to another landmark decision – a bill on oligarchs.

It is no coincidence that the NSDC became the operator of the so-called Register of Oligarchs. In its form and content this bill had no international precedent; it looked quite populist.

But it outlined President Zelensky’s aspirations to control and limit the oligarchs’ political influence, and in the long run to squeeze them out of politics altogether. Despite resistance (especially prior to its second reading), this bill was adopted by the Verkhovna Rada in late September 2021.

A big stand-off against a broad oligarchic coalition

The bill and later the law on the oligarchs became a subject of heated debate and, in the end, a fierce political struggle. One manifestation of this struggle was the dismissal of Parliamentary Speaker Dmytro Razumkov, who criticized certain provisions of the law on oligarchs.

As a result, both The adoption of the law on oligarchs and the dismissal of Razumkov led to the beginning of an open confrontation in politics and in the media between oligarch Rinat Akhmetov and President Volodymyr Zelensky.

And this is the main political trend of the autumn and winter of 2021. The law on oligarchs has brought the presidential team into conflict with a “broad oligarchic coalition” (Akhmetov – Poroshenko – Medvedchuk), as well as with a majority of the opposition forces.

Another high-profile personnel decision was the resignation of the most influential Interior Minister Arsen Avakov, who held the record for the longest continuous tenure in government – over seven years.

It is worth mentioning that half of the Cabinet ministers were replaced during the year. And here’s the paradox. A year ago, many expected a new Prime Minister and a complete government reshuffle. Instead, there was a significant realignment of the Cabinet, and Denys Shmyhal remained in charge of the government. He is a wonderful example of c areer survival and adaptability in his cooperation with the Office of the President of Ukraine.

Frequent reshuffles of government officials and other high-ranking figures have been a feature of President Zelensky’s HR style as he hunts for ‘ideal’ ministers and officials.

All the above trends indicate the strengthening of President Zelensky’s position in the system of power during 2021, especially compared to last year. He has seized and retained the political initiative. But here is a problem – the presidential team is involved in simultaneous political wars on many fronts and with a large number of opponents. And this is very risky.

Several Scandals, but One Sole Leader

In addition, in the autumn and winter of 2021, the situation for President Zelensky in politics and the media became more problematic and tense. This was due in part to the confrontation with Akhmetov and other opponents, but also as a result of a series of high-profile scandals. For example, we had the Pandora Papers, dubbed Pandoragate and a probe into the circumstances of a failed special operation to arrest members of Russia’s Wagner mercenary force.

President Zelensky’s rating situation in 2021 is a kind of “Ukrainian political roller coaster” or a ratings swing. There was a drop in the ratings in January; then from late February to September, there was a rise in the ratings – primarily due to the sanctions against Medvedchuk. October saw another significant decline, mainly due to Razumkov’s dismissal. At the end of the year there has been some improvement and stabilization.

Despite various problems, Volodymyr Zelensky remains the sole leader in the ratings race. The pack of his rivals remains almost unchanged since the 2019 presidential election. In 2021, only one new face appeared in this group – Dmytro Razumkov.

The situation is similar in the ratings race of the political parties. It should be noted that the ratings of the ruling Servant of the People Party are significantly lower than President Zelensky’s own ratings. According to most polls, his party remains the most popular, although, according to some other findings, it was overtaken by Petro Poroshenko’s European Solidarity. This change happened not so much due to the growth of its own ratings, but due to the fall in popularity of the Servant of the People Party.

Ukraine’s active foreign policy in 2021 should also be considered.

The most significant event in this area was the creation of the Crimean Platform as a permanent international tool in the struggle for the Ukrainian status of Crimea.

A very important trend is the intensification of the strategic partnership with the United States, which was facilitated by the election of a new U.S. administration headed by Joe Biden, and Ukrainian President Zelensky’s subsequent visit to the United States. Relations with the EU and NATO have also developed dynamically.

The President of Ukraine has continued to remind Western partners of the need for public recognition of Ukraine’s membership in those organizations.

A new trend, and this is also a specific feature of Volodymyr Zelensky’s political style, has been the open criticism of our Western partners on issues in which their actions have been contrary to Ukraine’s interests -notably the attitude to the Nord Stream 2 gas pipeline.

However, developments in the war zone in Donbas and the related peace talks were far from positive trends. After last year’s truce, albeit a relative one, a low-intensity war resumed. Since January 2021, Russia has effectively blocked negotiations in the Normandy Four Format. There is no progress on the negotiations of the Trilateral Contact Group. It was not until the end of the year that a Christmas truce was agreed upon, but it has not yet been fully implemented.

The most alarming trend is Russia’s threats to wage a new war against Ukraine. In the spring and at the end of 2021, there were build-ups of Russian troops on the border with Ukraine. Moreover, the Kremlin has begun giving the West ultimatums demanding “security guarantees” which are actually a demand to give Russia exclusive control over Ukraine and the entire post-Soviet space. Both the West and Ukraine reject the Kremlin’s ultimatums.

Slow but Sure Vaccination Rates

One of the main public policy priorities in 2021 was, of course, the fight against the COVID-19 epidemic. Ukraine experienced two major waves of the epidemic this year. For both objective and subjective reasons, there was a significant delay with the launch of mass vaccination of the population. Ukraine received its first batches of vaccines later than most other European countries. But in the latter half of the year, after the replacement of the Health Minister, the rate of vaccination increased significantly.

At present, more than 40% of the adult population has been vaccinated.

This is not enough for herd immunity, but the positive trend is obvious. In general, it should be noted that the healthcare system of Ukraine, despite all its problems, has withstood the pressures of this epidemic.

Very ambiguous trends have been observed in the legal realm. For a year now, it has not been possible to appoint, through a competitive process, the new head of the Specialized Anti-Corruption Prosecutor’s Office. And this blocks the effectiveness of new anti-corruption institutions.

Still there has been positive news. The Verkhovna Rada has given green light to judicial reform, which envisages a reset of Ukraine’s judiciary with the participation of international experts. True, the judiciary, which is largely corrupt and acts on the principles of collegial solidarity, is also opposed to the implementation of that reform.

In general, the process of reforms continues in the country, although there is also some ambiguity due to the resistance of conservative forces. In 2021, the agricultural land market finally started operating in Ukraine. A record harvest of cereals and vegetables was gathered.

On the other hand, there is much criticism of increasing tax pressure on the economy. Among the main priorities of the presidential team is infrastructure development. And it’s not just the Great Construction program that is causing the loudest debate. In particular, a decision was made on a large-scale program for the so-called ‘thermo-modernization’  (simply put, insulation) of residential buildings.

There is an interesting trend involving an attempt to interconnect economic and social decisions. For example, there were headline-grabbing decisions on the “economic passport of a Ukrainian” and the payment of UAH 1,000 (about $37) for COVID-19 vaccination.

Another significant and positive trend is the digitalization of the economic and social realms.

The Ukrainian-made Diia mobile app, which could be downloaded to phones, despite all its technical issues, is gradually becoming a central tool through which Ukrainians interact with their government.

In general, it should be noted that despite the epidemiological and economic problems, and fierce pressure from Russia, Ukraine is not standing still but continues to develop.