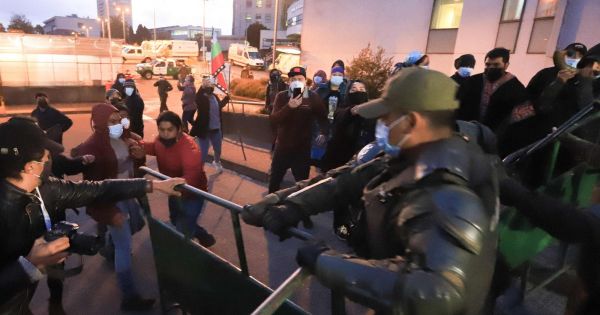 Chilean Home Secretary Rodrigo Delgado confirmed on Wednesday the death of two members of the Mapuche community following a shoot out with Marines and Carabineros in the Biobío Region which is under an exceptional emergency state precisely because of continued acts of violence.

It all happened Wednesday afternoon when law enforcement officers were about to lift a barricade across a national route when they were ambushed by hooded individuals with guns. At first, the officers countered the attack with blank bullets but as the shooting went on, they appealed to live munitions.

During recent days and despite the presence of military personnel in support of Carabineros in the seditious region, a train was derailed and a bus was set on fire. Later on Wednesday, a joint patrol of Carabineros and Marines was attacked with firearms. This time the patrol wasted no time in repealing the attack. Two people with rifles were arrested and at least three were injured, who were taken to the local hospital in Temuco.

I can confirm two deaths and three injured currently in hospital, said Home Secretary Delgado from Government House La Moneda in Santiago. .I can also confirm a four-hour difference between the two armed incidents and when there are ambush attacks and shootouts, innocents can be killed or injured by crossfire, and it’s hard to know from which gun bullets came, so I insist please caution, prudence and the investigation will have the most transparency.

Delgado said that all details of the shootouts had been delivered to the Prosecution and we want to know how the protocols worked out. Human rights organizations will be present at the autopsy of the deceased.