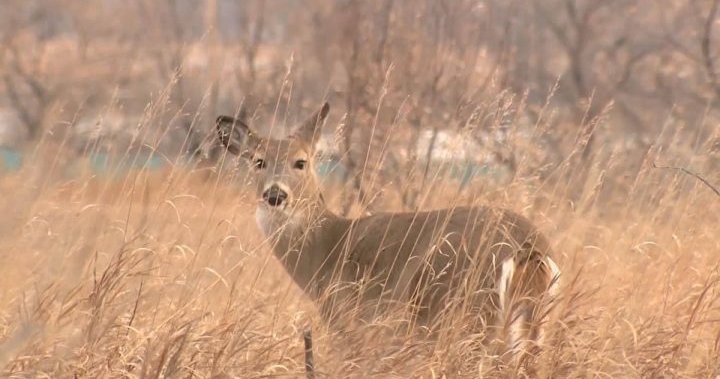 Many white-tailed deer in the northern U.S. have caught COVID-19, some new studies suggest, with potential implications for the pandemic fight.

And while the same hasn’t yet been found in Canadian deer, scientists say that finding the virus in wild animals could spell the end for any hopes of completely eliminating COVID-19 in humans.

“Any disease that gets into multiple species, we can’t eradicate,” said Scott Weese, a veterinary infectious disease specialist with the Ontario Veterinary College and director of the Centre for Public Health and Zoonoses.

Two recent U.S. studies have found evidence that COVID-19 is in the deer population. In one study, researchers sampled 283 deer in Iowa from April 2020 to January 2021 and found that one-third of them had evidence of COVID-19 infection. The researchers said these infections likely resulted from multiple human-to-deer and deer-to-deer transmissions.

Another study by the U.S. Department of Agriculture found antibodies to the SARS-CoV-2 virus in 40 per cent of the 385 wild deer they sampled in 2021 from four states: New York, Michigan, Pennsylvania and Illinois. These antibodies suggest that the deer were exposed to COVID-19 at some point, the researchers wrote.

These scientists said they examined deer because they knew that the animals were biologically susceptible to infection by this kind of virus and can exhibit prolonged virus shedding, are social animals and often live near urban centres.

They’ve been looking for the possibility that wildlife species, including deer, could become a “reservoir” for SARS-CoV-2, he said.

“If the virus circulates in the wildlife population, then it can become sustained within that population and become a source to reinfect humans,” he said.

It’s also possible that having a virus circulate in animals could result in new variants, said Weese.

That’s isn’t necessarily dangerous for humans, he said, but what health professionals don’t want to see is the virus mutating in a deer and still being infectious for people.

“Maybe it’s different enough that our immune system doesn’t recognize it as well,” he said, adding this is a low-risk, but not impossible, scenario.

A group of Canadian organizations, including the Public Health Agency of Canada, Ontario’s Ministry of Health and the Canadian Wildlife Health Centre, have been sampling a variety of animals – including mink, raccoons, skunks and bats – and so far haven’t turned up any evidence of the virus, Bowman said, although mink on farms in B.C. have been infected with COVID-19. They’re still collecting samples on muskrats, otters, beavers and white-tailed deer.

It’s possible that if deer in the northern U.S. have been infected, some Canadian deer might be, too, at least in places where the countries share a land border, Weese says.

“Deer don’t care where they’re walking,” he said, though he’s watching for the eventual results of the Canadian studies.

Weese said researchers aren’t sure how the virus got into deer in the first place – guesses include through deer farms or perhaps people feeding wild deer – and they also aren’t sure how likely it is that a person could catch COVID-19 from an infected deer.

Most people don’t have close contact with deer, though people who work with farmed deer could be at risk.

0:53
We could see a rise in diseases like COVID-19 because of climate change

The other at-risk group, he thinks, could be hunters.

“A wounded deer that’s breathing and they’re getting close to it, that could do it,” he said, as could handling the deer during butchering.

Wisconsin has released guidelines for hunters on how to protect themselves from potential infection, which include wearing a mask while cleaning the carcass and washing your hands, tools and surfaces that have come into contact with the animal afterwards. The state notes, however, that the CDC says there is currently no evidence that wildlife might be a source of infection for people in the U.S.

“The greatest risk of catching SARS-CoV-2, of transmitting that virus, is human-to-human,” Bowman said. “And we think that the risk of transmission of that virus from animals to human is lower. There is no evidence, for example, of a virus being transmitted through the preparation of food or the consumption of food, for example, from wild game.”

Scientists need to think broadly about the implications of viruses passing between animals and people for this pandemic, and the next one, Weese said.

“We’re one big ecosystem and the virus doesn’t care … if we’re a human or a dog or a cat or what we call an animal.”