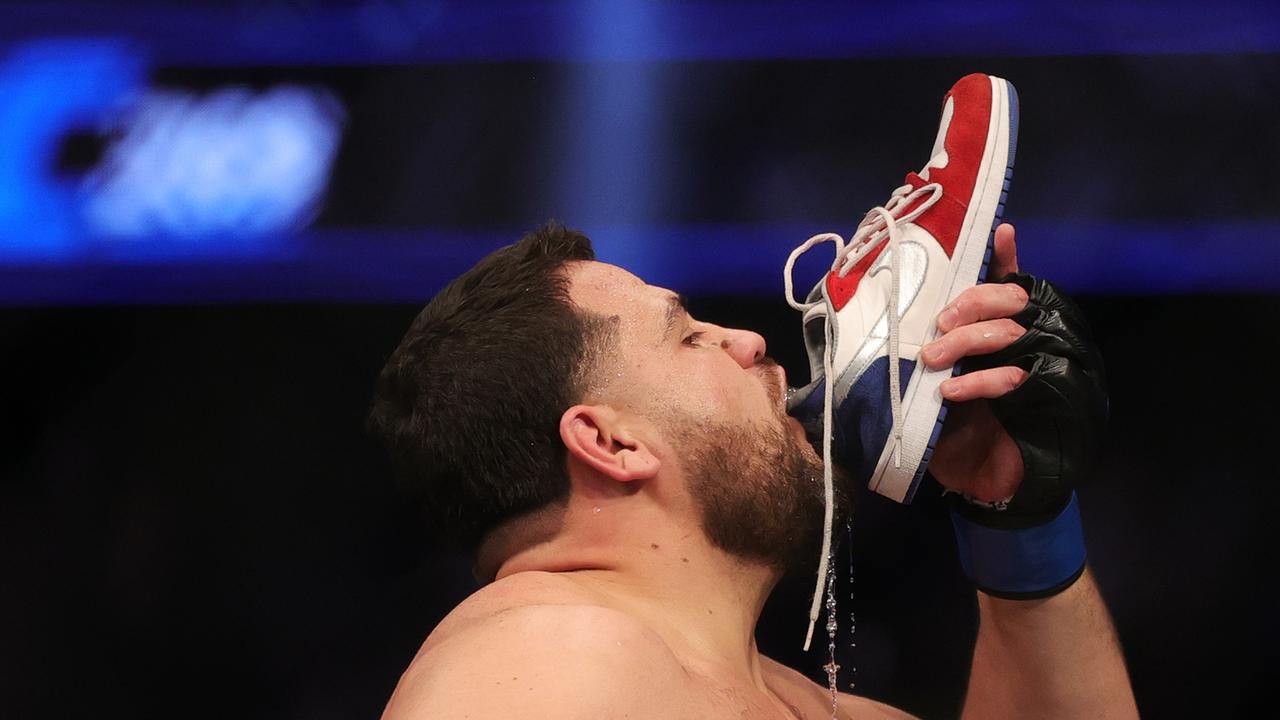 Tai Tuivasa can’t stop knocking his opponents out and celebrating with a shoey, and his post-fight reveal put the heavyweight division on notice.

The Western Sydney native finished Brazilian Augusto Sakai in brutal fashion, dropping the South American early in the second round to continue his winning streak.

Tuivasa turned Sakai’s legs into jelly for a brief moment with a thumping left hook, and it was from that punch the Aussie had Sakai right where he wanted him.

The 28-year-old continued to press Sakai to the fence, circling him and waiting to strike much like a lion lying in wait, ready to pounce and kill its prey.

As Tuivasa began to tee off with the punches, Sakai immediately switched into protection mode as he did everything possible to stay in the fight.

But when Tuivasa fully unloaded on the Brazilian, the fat lady was just about to step onto the stage as the Aussie wailed down thunderous strikes to his head.

First, it was a blistering right hand that began the combination of strikes although smart head movement from Sakai to evade a right uppercut from Tuivasa meant the credits weren’t ready to roll just yet.

However, there was little Sakai could do once Tuivasa slammed his right fist into his jaw, crumpling him and condemning the 30-year-old to his third straight loss.

As is tradition, Tuivasa leapt to the top of the cage, called for a shoe and beer — which he received, of course — and nearly blew the roof off the T-Mobile Arena in Las Vegas as he chugged down a celebratory shoey with sheer delight.

If the finish, which Tuivasa will hope nets him a $50,000 performance of the night bonus, wasn’t frightening enough then the Aussie prospect’s warning to the rest of the heavyweight division will have his future foes squirming.

“Like I said in my past interviews, I feel I’m getting better and better at this sport,” Tuivasa said in his post-fight interview with Joe Rogan.

“I heard my corner say ‘that left’s opening him up.’ I just had to stay on my edge and just stalk him and hunt him down.”

“I said it before, I’m a banger from f***ing Western Sydney and I’ll bang on with anyone.”

It remains to be seen who Tuivasa will have in his crosshairs next, conceding it’s “not my job” when it comes to deciding his future opponents.

“I come here, I put the show on for a crowd. I’ll fight anyone.