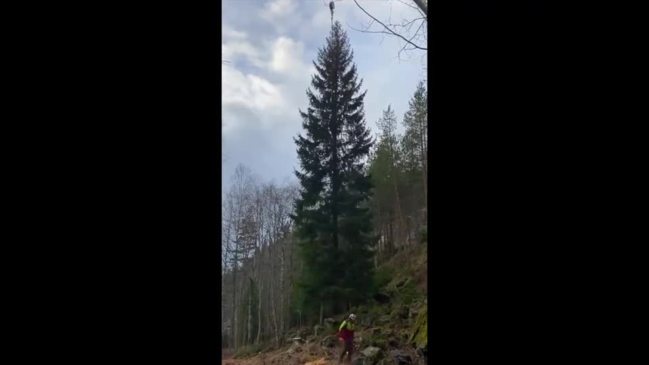 The UK’s Ambassador to Norway, Richard Wood, has rejected criticism of the Trafalgar Square Christmas tree after photos of it taken prior to its lighting ceremony prompted mockery from some who said the spruce was too sparse. Photos of the tree taken during both day and night after its arrival in Trafalgar Square on November 30 went viral on social media, with some respondents saying it looked “half-dead,” “spindly,” or “scrawny,” Sky News reported. Ahead of the tree’s lighting ceremony on Thursday evening, December 2, Wood tweeted video of the tree taken two weeks earlier as it was being lifted from the Norwegian forest where it was felled. As crews used a crane to lift the tree, onlookers cheered and applauded, with one person heard exclaiming, “It’s flying!” Wood had attended the felling of the tree in Ostmarka, a forested area east of Oslo, on November 16, along with Lord Mayor of Westminster Andrew Smith, Mayor of Oslo Marianne Borgen, and young students from two Norwegian schools. Norway has gifted a spruce to the United Kingdom annually since 1947 as a thank-you for aid received from the UK during World War II, the British Embassy in Oslo said. “Twitter isn’t real life!” Wood wrote alongside the video. “The Trafalgar Square Christmas tree is appreciated by the vast majority. And is an amazing gesture from the people of Oslo. Looking forward to the lighting tonight!” Credit: Richard Wood via Storyful