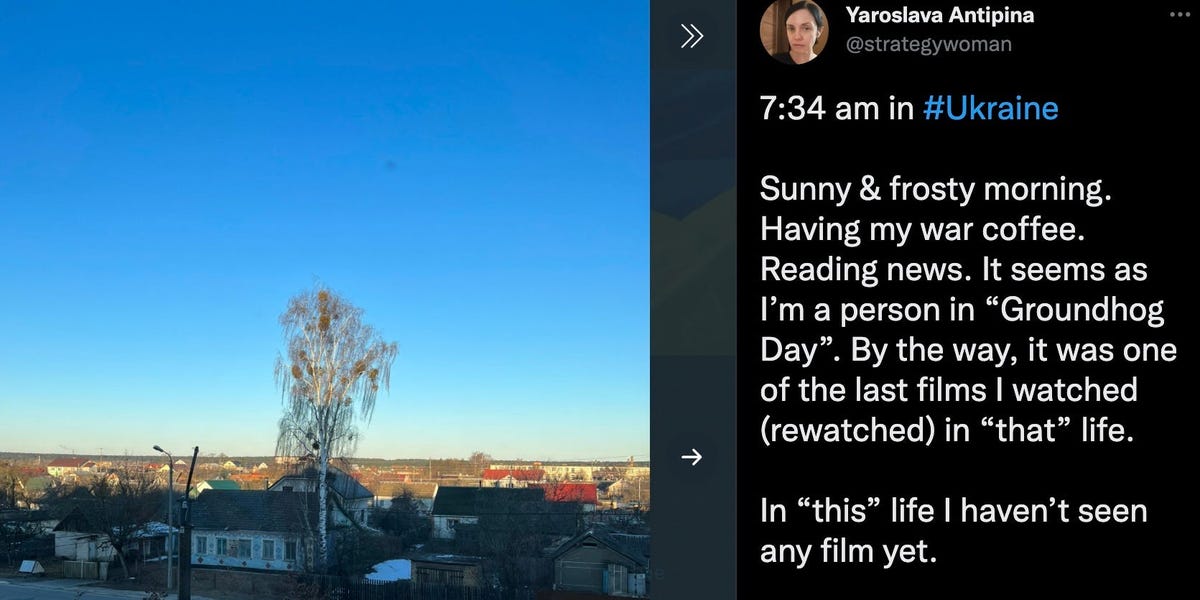 “Sunny & frosty morning. Having my war coffee,” she tweeted last week under the handle @strategywoman, accompanied by a photo of a window view of a residential neighborhood. “Good morning, world.”

The coffee tweet is usually the first of multiple Twitter updates throughout her day, where she gives her 90,000 followers a glimpse of her life as an “ordinary” person in a changed country.

Sometimes, she pens down random thoughts: “Ukrainian women are fantastic,” she tweeted alongside a funny conversation she had with a woman. Other times, the tweets are small moments in her daily life, like the time she met a “Kind Woman with a Huge Dog.”

In one of her latest tweets on Thursday, she wrote about the birds singing as she sipped on her morning cuppa — it’s “regular life, but with a war taste.”

Antipina, a resident of Kyiv, left the city in early March with her 19-year-old son to live with her mother in Western Ukraine. She has not attempted to flee Ukraine because her son, like all Ukrainian men between the ages of 18 and 60, is forbidden to leave, she told USA Today in an interview.

“War coffee is resistance. Strength,” she told CBS News. We Ukrainians need such things to survive, to be strong. Because for me, the very hard thing right now is the uncertainty. You don’t know what’s going on the next day, next week. But we will manage. We have no choice.”

On some mornings, Antipina asks her followers to share pics of their “peace coffees.” Readers from Germany, the UK, and the US have all responded.

“I do want to have my peace coffee as soon as possible, but at the moment, it’s just war,” she told USA Today.

Antipina did not immediately respond to Insider’s request for comment.