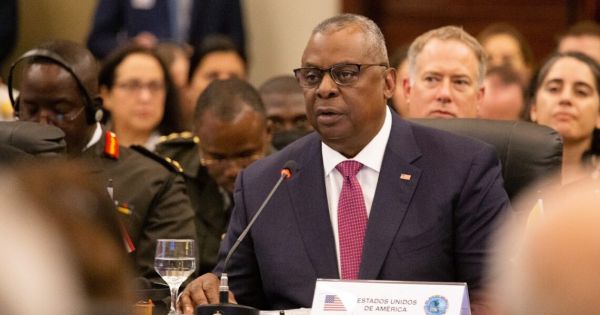 US Defense Secretary Lloyd Austin Tuesday underlined during his trip to Brasilia that the Armed Forces should respect democracy and remain under firm civilian control. His remarks came two days after incumbent President Jair Bolsonaro claimed upon launching his re-election bid that the Army is on our side.

In his speech at a meeting of defense ministers from across the Americas, Austin made it clear that the military must be committed to the rule of law and work to build transparent, effective and civilian-led defense institutions.

Bolsonaro has publicly questioned Brazil’s electoral system and even told a few dozen ambassadors earlier this month that he believes the Army should step in to guarantee transparency in the upcoming Oct. 2 elections and hold a separate vote counting.

The US government is closely following the development of the Brazilian electoral process and has insisted that its outcome must be respected by all institutions.

In a meeting Wednesday with his Brazilian counterpart, General Paulo Sérgio Nogueira, Austin insisted that the Joseph Biden administration expects Brazil to keep the tradition of fair and transparent elections this year.

Nogueira reportedly defended the actions undertaken by the Armed Forces before with the Superior Electoral Court (TSE) seeking to be allowed to carry out a separate, manual vote cunting to add transparency to the electronic machines, whose reliability Bolsonaro has always questioned.

The South American official also told Austin that all Brazilians can vote freely for the candidate they deem the most correct and appropriate, it was reported, while the American secretary highlighted the deep connection between the two countries whose pillars are democracy, fair elections, and human rights.

On the part of Brazil, I manifest respect for the charter of the Organization of American States, OAS, and the Inter-American Democratic Charter and its values, principles, and mechanisms, Nogueira said.