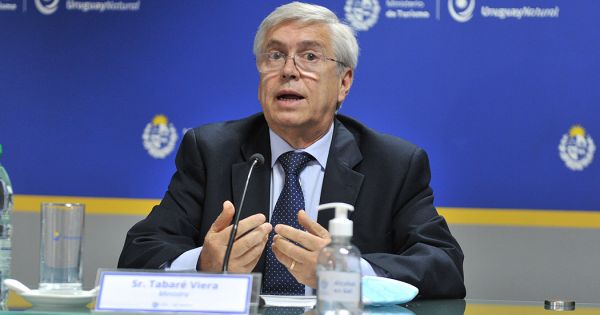 Vaccinated travelers to be spared further testing to enter Uruguay

Uruguay’s Minister of Tourism Tabaré Viera has requested his Public Health colleague Daniel Salinas to review the possibility that incoming travelers fully vaccinated against COVID-19 are spared the swab test at the earliest.

Viera insisted the sooner that measure became effective the better for the industry.

Health Ministry officials have said they would attend to Viera’s request and that in all likelihood the new measure would become effective in April.

To enter Uruguay, people with a complete vaccination schedule may attach either a PCR test or a negative antigen test. As of April next, this requirement will be lifted, it was announced.

I believe that all the parameters indicate that this wave of [the] Omicron [variant]would be diminishing around the end of March and the first half of April, Salinas said last week.

”As for the lifting of the sanitary emergency, it has other edges (…) surely that will be on the table once this wave is over and we are at a more than acceptable level of vaccination”, he added.

COVID-19 cases throughout Uruguay are said to be under control following a prolific vaccination campaign. Health authorities reported Thursday that 2,138 tests came out positive out of a total of 13,151, with 9,900 active cases, of which 54 are hospitalized in critical care centers. Four deaths with a diagnosis of SARS-CoV-2 were confirmed during the day.

Many European countries such as the United Kingdon have already lifted all sanitary requirements or are just about to go in that direction.

All of Uruguay’s departments (provinces) still have active cases, it was reported.