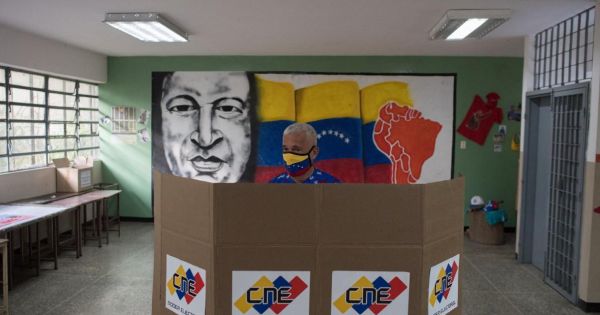 With 58% of Venezuelans not showing up to vote, the ruling PSUV Sunday won regional and local elections by a landslide.

We want to congratulate and thank the voters, the organizations with political ends, the candidates, the workers of the CNE and the Plan República. The day passed in peace, without notable events that detract from the strength of this process, said National Electoral Council (CNE) Chairman Pedro Calzadilla before admitting turnout had been 41.80%, with only 8,151,793 votes cast.

Calzadilla then confirmed the opposition had obtained three governorships, of which two correspond to the MUD – Democratic Unity Table (Cojedes and Zulia) and one to Fuerza Vecinal (Nueva Esparta). The ruling party obtained 20 governorships in addition to the position of mayor of El Libertador, a district within Caracas. It was one of the 335 mayoral seats at stake in addition to the 23 governorships. There were also 253 seats to be filled among legislatures plus around 2,500 vacancies for local councillors.

From this moment the CNE authorizes regional and municipal boards to totalize and proclaim the positions in dispute this Sunday, concluded Calzadilla.

With Sunday’s results, the ruling Chavists have consolidated their supremacy nationwide. A successful democratic day has concluded, the people have come and made the popular will felt. It is the spirit of the people that have once again prevailed, Calzadilla said.

Meanwhile, President Nicolás Maduro has celebrated a victory, which, as per his account, was the result, the product of an effort.

Of 24 federal entities, we have won 21. Good victory, good harvest, Maduro went on.

Sunday’s were the first elections in which the opposition has participated, after calling for abstention for years because democratic guarantees were not met. This time around, foreign observers were summoned to the South American country to monitor the process, particularly a European Union mission which is due to release a report on the events in the next few days.

November 21 is a historic date and we write it in peace, Maduro had declared before the results were known, while Diosdado Cabello, PSUV’s second-in-command claimed turnout had been significant enough to shut up those who speak of fraud.

However, there were some reports of irregularities, threats, arrests and even one death. The NGO Súmate claimed to have received 64 documented complaints of irregularities, of which 25% refer to the installation of the so-called Red Points, checkpoints where voters were asked to show their homeland ID cards in the states of Bolívar, Aragua, Táchira, Anzoátegui, Carabobo as well as in Caracas.

Another 21.87% discrepancies had to do with changes in the Electoral Registry, and 20.31%, were about irregularities in the constitution of the polling stations.

The NGO Foro Penal also reported at least 13 arrests, in addition to one person killed in the state of Zulia: Portuguesa 2 arrests; Barinas 1, Zulia 2 and 1 murder; Aragua 4 arrests; Nueva Esparta 4 and in Lara several to be confirmed. We continue to process complaints received, said the NGO through social media.