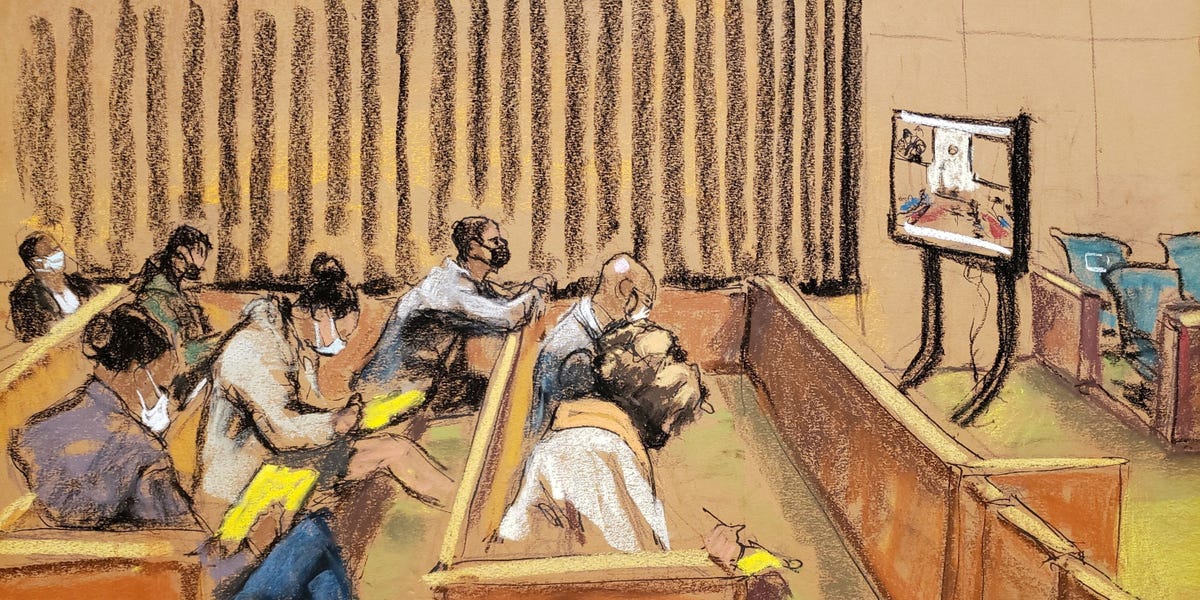 For journalists, the R. Kelly trial was hard to watch.

We weren’t physically permitted in the courtroom where the trial was taking place because of coronavirus restrictions, so there was a strange sense of alienation as we observed witness after witness testify about horrific sexual abuse via video feed from a chamber two floors above.

The TV screens in the overflow room where we were stationed each day were blurry. We were forced to squint as accusers relived the lowest moments of their lives so that 12 jurors could decide whether the R&B legend was guilty of a long list of sex crimes.

Kelly’s attorney, Nicole Blank Becker, often sat to the singer’s right and obscured his face. We could only see Kelly in a zoomed-in breakout box on the top left corner of the screen, as if he was a YouTube commentator. His face was slightly larger than a nickel.

Kelly watched witnesses testify mostly in silence, sometimes furrowing his eyebrows when a witness accused him of sexual abuse, and sometimes bopping his head when an excerpt of one of his songs played.

Witnesses themselves often appeared as little more than a blur on the video feed. One sketch artist resorted to using binoculars in the early days of the trial. Jane Rosenberg, the court illustrator for Reuters, sat in her place of honor in a front-row bench of the press public gallery every day, leaning forward and peering through her glasses to get every detail possible. She blurred the faces of some witnesses accusing Kelly of sexual misconduct, as their identities were shielded by the court.

The court understandably did its best to protect the privacy of witnesses who say Kelly subjected them to humiliating treatment. But in doing so, it refused journalists access to some of the video and documents that jurors used to reach a verdict. While another breakout box on the video feed displayed evidence, most of the documents used fonts too small for us to see properly.

And while jurors sat in the public gallery area of Judge Ann Donnelly’s courtroom, we couldn’t search their faces for clues about the verdict because they were completely off-screen.

On a typical day, we took lots of handwritten notes and finished work from a nearby park

An Insider reporter found herself crunched up on a park bench Wednesday outside the Brooklyn Federal Court Building, racing the setting sun to file her story. As she fought off mosquitoes that were landing on her arms and legs, R. Kelly supporters danced nearby to his music and chanted for his freedom. Those supporters cheered on Kelly’s defense team as they exited the courthouse across the street.

It was a surreal scene. But it’s not every day that a celebrity like R. Kelly is tried in a sexual abuse case.

Knowing how high-profile the trial would be — and that Kelly fans were planning to fly in from around the country to support him — reporters showed up for court between 5 and 6 a.m. ET during the first week of the trial. Tired reporters lined the sidewalk in Brooklyn Heights, many of them sitting on the ground, until US Marshals opened the doors of the court to media after 8:30 a.m. As the trial progressed, members of the press were able to trickle in closer to 9:30 a.m., which came as a relief.

The two overflow rooms open to the press and the public had about 20 socially distant spots in each. Credentialed journalists were allowed to bring electronics into the building, but had to leave the overflow room and relocate to the media room on a different floor to use them.

We took handwritten notes while witnesses testified on the stand for about seven hours a day. The audio feed in the overflow room wasn’t always great, but we tried our best not to miss a good quote.

On breaks — an hour for lunch and a 10-15 minute restroom break each in the morning and afternoon — we’d make a mad dash to the media room, where we left our phones and laptops, and transform those pages and pages of notes into articles.

Lunch presented another obstacle because we weren’t allowed to eat in the media room. Fortunately, the Brooklyn Federal Court Building has an outdoor balcony we could take advantage of on the rare days we were able to file our stories with time to spare.

Then came the crunch at the end of each day in court. Federal marshals would lock up the media room shortly after the judge recessed for the day, giving reporters just enough time to grab their gear and rush to find a cafe, bar, or bench in a nearby park where they could file their stories on deadline.

R. Kelly fans showed up every day and kept us on our toes

The harrowing testimony in the case and the air conditioning that seemed to run at a 40-degree temperature created a chilled atmosphere in the overflow rooms. The US Marshals who oversaw the rooms for journalists and members of the public also did their best to preserve the calm.

But it didn’t take long for the calm to unravel.

Kelly’s fans showed up every day. At first, they were placed in an overflow room apart from journalists, instead sharing a space with family members and friends of the witnesses testifying. They often arrived early and filled the room to its coronavirus-restricted capacity, to the point where people directly associated with witnesses were turned away.

An Insider reporter watched as marshals turned away one person, who said she was the therapist of one of Kelly’s accusers testifying in the trial, because the public gallery was already full.

Another R. Kelly fan was arrested outside the courthouse after another of the singer’s supporters made a complaint about him.

On a different occasion, reporters were made to “shelter-in-place” in the courtroom for about 15 minutes at the end of the day after a security incident. We’re still not exactly sure what that security incident was.

The overflow room grew increasingly rowdy as the trial went on. Some Kelly supporters cheered on defense attorney Deveraux Cannick as he grilled witnesses and heckled testimony from accusers. Outside the courthouse, as accusers and their lawyers left the building, some held up banners in the singer’s defense and blasted his music.

Time seemed to melt inside the courthouse

It felt as though Judge Donnelly never — not once — started the trial on time.

Attorneys would often venture into sidebars for long debates about the admission of testimony, evidence, and the scope of the questions they were permitted to ask. We in the public gallery couldn’t hear what they were talking about, and these sidebars were redacted from transcripts — when a court reporter was present at all. Cannick, Kelly’s defense attorney, often needed five minutes to get his papers in order, punctuating his slut-shamey cross examinations with stretches of boredom.

Deprived of their smartphones, reporters doodled in the overflow room. They compared drawings of pigs and dinosaurs. One journalist, who had sparkly gel pens and highlighters and a knack for drawing palm trees, made their dinosaurs in the style of Lisa Frank. Another reporter, on a dare, walked across the back of one of the room’s long wooden benches as if it were a balancing beam.

Time continued to sputter when prosecutors brought their final witness, Dawn Hughes, an expert in interpersonal violence who also testified at the NXIVM trial. She explained in detail the ways that victims of abuse attach themselves to their abusers.

“They’re always trying to separate the good things about them from the bad,” Hughes said as Becker, a former sex crimes prosecutor herself, listened closely.

Several times, Donnelly told Hughes to slow down. She was talking too fast and the court reporter, transcribing everything happening in the courtroom, just couldn’t keep up.

At one point in the trial, time actually stood still: The clock in the overflow room had broken.

An Insider reporter, who’s one of apparently few journalists to own a watch, was bombarded with questions. Eventually we figured out that it was the top of the hour when the big hand struck eight.

It took jurors about 10 hours to reach a verdict, convicting Kelly on all nine counts.

When the news broke in September that a verdict had been reached, a very pregnant Insider reporter who’d just sat through two prenatal appointments in downtown Manhattan waddled at full speed — with a hospital band still fastened to her wrist — to a subway station.

Upon arriving at the Brooklyn courthouse, she found the building surrounded by far more journalists than had been covering the trial from inside the overflow room. TV cameramen stood eagerly awaiting any action at the doors.

Dozens of journalists swarmed Kelly’s defense team as they exited the building, making it impossible for them to move through a nearby park without stopping to share a few brief words about what they felt were inconsistencies in the government’s case.

Then celebrity attorney Gloria Allred, who represents several of Kelly’s accusers, gave a statement while the singer’s supporters expressed their disappointment in the background. One bystander called the verdict racist, although most of the victims who testified in court were people of color.

As the afternoon dragged on and most of the crowd outside the courthouse cleared the area, a small group of dedicated Kelly supporters remained.

They embraced each other, blasted the singer’s more melancholy songs from their radios, and bonded over the last time they saw him in concert.

“I just can’t believe it,” said one woman who shared that she last saw Kelly perform live in Brooklyn, the same borough where a jury had just deemed him a sexual predator.