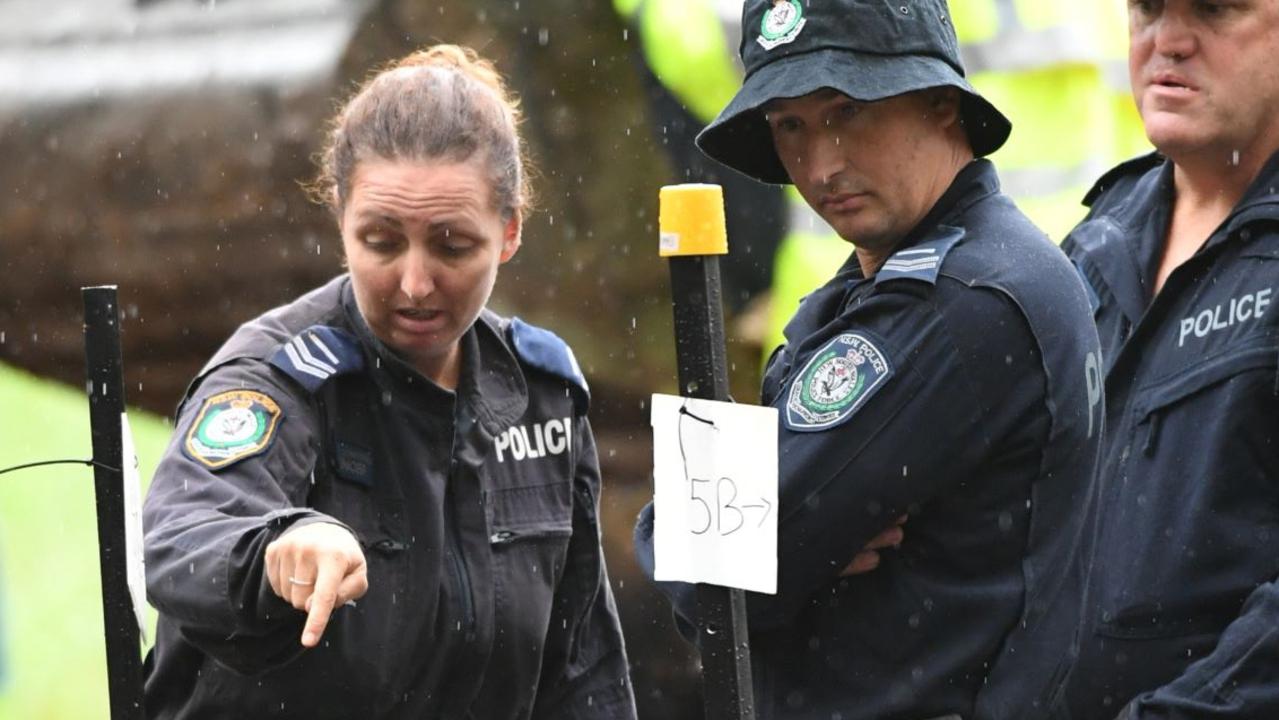 Investigators have made a discovery in a new, uncleared area of the Tyrrell search site, with the potential evidence being taken away for testing.

Investigators have discovered another piece of potential evidence, this time in an area police have yet to search.

NSW Police, with the help of RFS personnel and a group of experts, have spent the last nine days scouring through bushland in Kendall on NSW’s mid-north coast near where the boy was last seen in 2014.

Officers have been making their way along Batar Creek Rd, meticulously sifting through the soil for clues as they go.

RFS crews, who are working ahead of the search team to clear the thick bushland, spotted a piece of material as they worked to clear the area on Tuesday morning, 10 News reports.

Forensic archaeologist Tony Lowe and a police officer made their way over to the new part of the search site and were seen photographing the item, a small piece of black cloth, before placing it into an evidence bag.

The piece of fabric was found in the mud, next to the creek bed, according to the media outlet.

This is the 11th piece of material investigators have bagged and taken away for testing since the search began on Monday last week.

Hundreds of police officers descended on the small town of Kendall last week as part of renewed efforts to figure out what happened to William after he vanished in 2014.

The three-year-old was last seen wearing a Spider-Man outfit at his foster grandmother’s home on Benaroon Dr in Kendall on September 14, 2014.

The home and a section of nearby bushland along Batar Creek Rd have been the main focus of the renewed search, with officers clearing the area and sifting through tonnes of soil for clues.

Last week, Detective Chief Superintendent Darren Bennett said the decision behind the major search revival was “in response to evidence we have obtained over the course of the investigation” and it was “not speculative in any way”.

Speaking to Sunrise on Tuesday, Police Minister David Elliot assured viewers that investigators wouldn’t be back in Kendall unless they thought there was something there that could help with the investigation.

“They wouldn’t be there unless they thought there were new and fresh leads,” he told the program.

“I think that is the expectation for the people of NSW, and for Australia, that police go to the nth degree and they don’t stop until they know that every opportunity of finding evidence is exhausted.”

More than seven years have passed since William vanished, with Mr Elliott saying police understand any potential evidence they collect will need to be looked at “through the prism of time”.

“As far as the commission is concerned in the conversations I have had with those on the ground, they are not going to stop and they will make sure that when they go to bed at night they are confident that they have done everything that is humanly possible,” he said.

The renewed search has now entered its ninth day, with efforts initially expected to last up to three weeks.

However, wet weather and the arduous task of clearing dense bushland means the search could now stretch out for months.

The search was initially focused on the Benaroon Dr home where William disappeared, with officers digging through the garden bed below the home’s two-storey balcony.

Now, officers are focusing on an area of bushland along Batar Creek Rd, less than one kilometre away from the home.

NSW Police Commissioner Mick Fuller told the ABC investigators would continue searching the area until they “believe the job is done”.

He revealed 15 tonnes of soil and other pieces of potential evidence have been taken from the search sites to undergo forensic examination.

“If you think about 15 tonnes of soil being moved into a clandestine lab, there could be weeks and weeks of searching through that before we have any answers,” Commissioner Fuller said.

Police have searched less than 20 per cent of the 1.5 square kilometre area, though it is understood some areas will be more difficult to search than others.

Rain drenched the area over the weekend, with more wet weather forecast for the rest of the week.

Authorities have been meticulously sifting through the soil, using both an electronic sifter and their hands to search through the dirt for any clues.

Forensic experts, archaeologists and forensic anthropologists have advised officers to dig to a depth of about 15cm, with a police spokesperson saying anything beyond that is likely “too old”.

Multiple pieces of potential evidence have been bagged and taken away for testing by investigators, the majority of them appearing to be pieces of fabric in varying sizes.

All of the samples have been taken to Lidcombe for testing.

Last week, investigators were seen comparing a piece of material to a sample of a red and blue Spider-Man suit – the same outfit William was wearing when he disappeared.

Last Tuesday, officers were seen searching the area below the balcony of the Benaroon Dr home, with investigators removing plants and sifting through soil from the garden bed.

A cadaver dog was also taken through the garden area and officers sprayed luminol, a substance used to detect trace amounts of blood.

According to multiple reports, police were investigating the theory that William may have fatally fallen from the balcony of the home.

Police confirmed last week that there was “no doubt” officers were looking for William’s remains.

On Thursday, the focus was moved to the garage of the home, with AFP officers using a ground penetrative radar to search for any disturbances or anomalies in the soil beneath the concrete flooring.

It was later revealed the results had returned “clean data”, with a police spokesperson saying there was “nothing that would indicate any abnormalities of interest to the investigation”.

Last week it was revealed William’s foster mother had emerged as a person of interest in the investigation. No charges have been laid.

She has strongly denied any involvement in or any knowledge of William’s disappearance and there has been no evidence found to contradict those denials.

Examinations are also underway of a car that belonged to William’s now deceased foster grandmother at the time of his disappearance.

Police revealed on Wednesday that the vehicle, a silver Mazda hatchback, was seized from a home in Gymea, in the Sutherland Shire, under a coronial order on November 9.

It is being held in a secure facility where forensic examinations and analysis are underway – a process detectives say will take “several weeks”.

News.com.au understands police are investigating whether the vehicle was used to move William’s body after his death.

The person who had ownership of the car at the time it was seized is not believed to be related to the disappearance of the three-year-old in 2014.