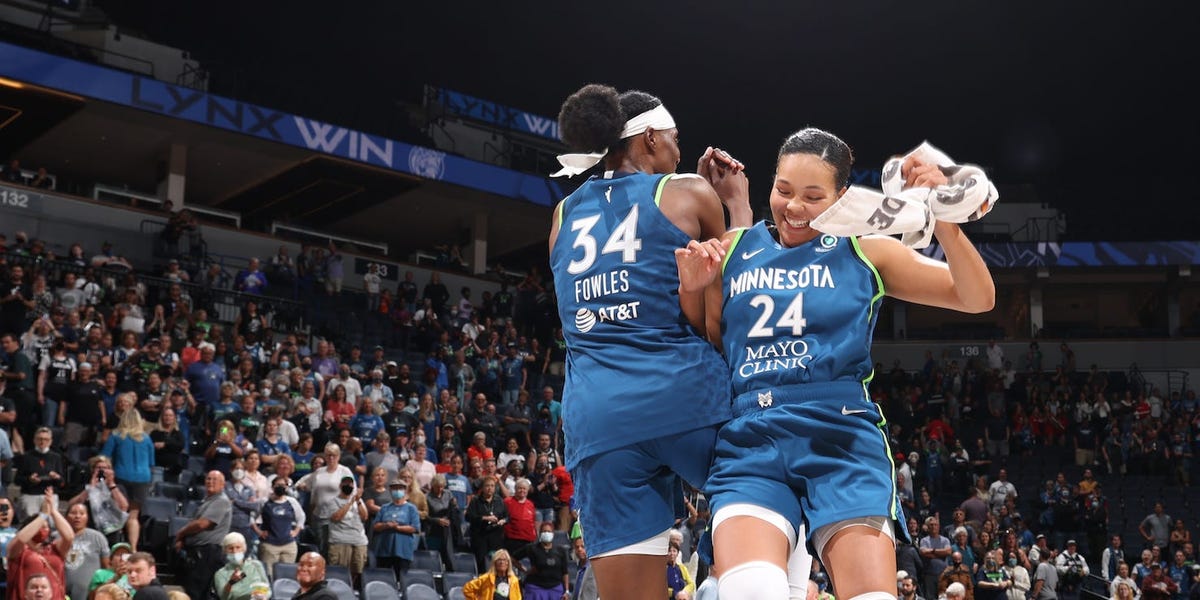 Just 10 weeks after giving birth to her newborn daughter, Napheesa Collier rejoined her team on the court.

The two-time WNBA All-Star started for the Minnesota Lynx against the Atlanta Dream on Sunday afternoon, marking her first game since the WNBA playoffs last September.

In 21 minutes on the floor, Collier recorded six points, two rebounds, an assist, a steal, and a block. Plus, her Lynx earned a big home win as they continue to hunt for a playoff berth.

“I was really excited,” Collier said in the post-game press conference, holding baby Mila in her arms. “Obviously there was some nerves coming in, especially this late in the season, and trying to get back here and rush to do everything. But it felt so good to hear my name called and have the fans cheer for me. It was a really good feeling.”

“I’m really glad that I played tonight,” she added.

Collier announced her pregnancy in November 2021. Three months later — and just three months before Collier and her husband, basketball trainer Alex Bazzell, expected to welcome their first child — fellow Minnesota superstar Sylvia Fowles announced that she would be retiring at the end of the 2022 season.

From then on, Collier made it her mission to play alongside the WNBA’s all-time leading rebounder at least one more time. Mila arrived at the end of May, and Collier has been “working her ass off to put herself in this position” in the 74 days since, her husband wrote on Twitter Sunday.

“I came here with the goal of playing with them again — and especially Syl,” Collier said after the game. “I’ve made that no secret, so it felt so good to be on the court at the same time as her for this last season.”

“And it was good to get that rust off, too,” Collier added. “It was nice.”

The Lynx hunt for a 12th-straight playoff spot

With less than a week remaining in the regular season, the Lynx are still looking to punch their ticket to the postseason for the 12th straight year. Despite an incredibly slow start to the season, Minnesota seemingly turned a corner in late June and has bounced back into the race for a playoff spot.

Five other WNBA teams — the Dallas Wings, New York Liberty, Phoenix Mercury, Atlanta Dream, and Los Angeles Sparks — are still mathematically eligible to earn one of the three remaining bids to this year’s postseason. After Sunday afternoon’s victory, the Lynx were just one game out of playoff contention.

Collier’s timely return should certainly help Minnesota find its way back into the mix. The 25-year-old — who, in 2019, was the league’s rookie of the year — led the Lynx with 16.2 points per game last season while adding 6.6 rebounds, 3.2 assists, 1.3 steals, and 1.3 blocks per contest.

Mila’s mom is an incredibly well-rounded threat. She’s someone Minnesota head coach and general manager Cheryl Reeve says is “like a security blanket for everybody” on the team.

And from Sunday afternoon on, “each time she plays, she’s going to get more comfortable,” Reeve said after the game.

The Lynx will head to Phoenix to face the Mercury on Wednesday before returning home to host the Seattle Storm two days later. They’ll end the regular season on Sunday with a road game against the Connecticut Sun.

Whether or not Minnesota succeeds in making the playoffs this season, Collier hopes she still has plenty of basketball ahead of her. And she’s excited to bring her daughter along for the journey.

“I’m doing this for her now — I’m not just doing this for me,” Collier said, referring to Mila. “I love the idea of her watching me play. Hopefully I’ll be playing for a long time to come and we can grow up together around this game that I love and to [make] her a part of that.”