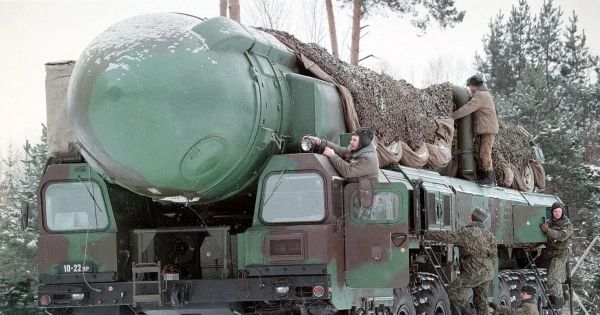 Ukraine’s lesson: you need to have your own nukes

By Gwynne Dyer – Would Vladimir Putin’s Russia have invaded Ukraine three weeks ago if it had 1,900 nuclear warheads on 176 ICBMs and 2,600 tactical nuclear weapons?

He wouldn’t have invaded if Ukraine had even one nuclear missile capable of reaching Moscow.

When the Soviet Union was dissolved in 1991, Ukraine got custody of all those nuclear weapons because they had been based on its territory at the time of the break-up. Suddenly, Ukraine was the world’s third biggest nuclear power, with more warheads than Britain, France and China combined.

I was in Kiev several times in that period. I interviewed quite a few of the Ukrainian nationalists who had suddenly emerged into the open (having been in deep cover during Soviet times) and I don’t recall a single one who mentioned those nuclear weapons.

And neither did I, to be honest. It didn’t seem very relevant at the time.

But it certainly feels relevant to a lot of Ukrainians now. They gave away the one thing that could have kept them from being invaded.

The Russians and the Americans were very unhappy about Ukraine’s nukes in the early 1990s, as they both saw them as a kind of proliferation. More fingers on more triggers (Belarus and Kazakhstan also inherited smaller numbers of Soviet nukes and delivery vehicles) made the task of maintaining mutual nuclear deterrence more complex and unstable.

So the two superpowers, as they were still known, used political pressure and judicious bribes to persuade the new Ukrainian government to hand all its nuclear weapons over to Russia for destruction.

Post-apartheid South Africa was getting rid of its nuclear weapons at the same time, so it didn’t seem to be a bizarre or foolish decision at the time.

The great difference, of course, was that South Africa did not have a nuclear-armed great power as a neighbor. Ukraine did and it has come to rue its mistake. This is a stake in the heart of the anti-nuclear proliferation campaign that was once seen as mere common sense.

It is, in fact, the third stake to be pounded into that rather crowded heart, but the first two were less convincing. Saddam Hussein, the Iraqi dictator, had a nuclear weapons program during his war with Iran in the 1980s, but it was comprehensively dismantled by UN inspectors after he invaded Kuwait and was defeated in the first Gulf war in 1990-91.

He never restarted that nuclear weapons program, but the United States invaded Iraq anyway in 2003 and the puppet government it installed in Baghdad hanged him.

Saddam Hussein richly deserved it for his many other crimes, no doubt, but the take-away was: for a dictator, nuclear weapons are the only life insurance that really works.

The Libyan dictator, Muammar Gaddafi, was so frightened by the American display of lawlessness in the 2003 invasion of Iraq that he let himself be bullied into closing down his own decade-old nuclear weapons program.

Eight years later, in 2011, Gaddafi himself was driven from power by NATO air strikes and then murdered by NATO-backed rebels. His own fault: he had jumped the wrong way. But once again, it was a cruel dictator who paid the price, so who cares?

In 1994, Ukraine let itself be sweet-talked into giving up all its nuclear weapons. In return it received solemn assurances in the Budapest Memorandum that Russia, the U.K. and the U.S. would “refrain from the threat or use of force against the territorial integrity or political independence of Ukraine.”

That worked well, didn’t it?

A week ago, Sky News asked Svitlana Zalishchuk, foreign policy adviser to the Ukrainian deputy prime minister, if giving up the country’s nuclear weapons had been a mistake.

“Yes, without a doubt,” Zalishchuk replied.

Countries that own nuclear weapons are “untouchable,” and it is “because we voluntarily gave up on our nuclear weapons and the Budapest Memorandum has been ignored (that) we find ourselves in the situation that we are in.”

If you doubt me, just ask the Iranians, or the Taiwanese, or the South Koreans, who are all watching closely. Or even the Japanese and the Vietnamese, come to that.

If you get into a confrontation with a nuclear power, and you don’t belong to a nuclear-armed alliance like NATO, then you cannot trust any other country to risk a nuclear war on your behalf.

Guarantees and assurances are useless.

You need to have your own nukes.